We've partnered up with our neighbors to the north...no, not Wisconsin...WILMETTE, to bring you free tickets to some of our favorite Windy Kindie acts.  The Windy City has some of the best kids' indie musicians in the country.  Come rock out with your punk kin, little folk and rock tots "at the mette".

Enter right here to win 4 free tickets to the first 3 Wilmette Theatre kids shows, then check back like we vote in Chi, IL...early and often for great weekly giveaways, original footage, and more.   Entries are open until midnight the Thursday before each show.  Winners will be announced here each Friday.


Wilmette Theatre will be presenting their Kids Concert Series including  Human-Tim + Robot-Tim featuring music and dance for the whole family from babes to the grandparents.  Then don’t miss Little Miss Ann bringing a new face to music for young people and Chi-town super fav, Super Stolie.

Don’t miss these high energy and entertaining shows for the whole family. Human-Tim+ Robot-Tim will be happening on Saturday, January 19 at 10am, Little Miss Ann on Saturday, February 16 at 10am and Super Stolie on Saturday, March 23 at 10am.  Tickets are $10 in advance or $12 at the door.  And don’t forget the VIK (Very Important Kid) Pack with access to any 4 of the 2013 Kids Concerts for $26. 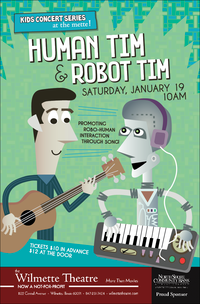 Human-Tim + Robot-Tim have been making music for small humans and their grown-ups since 2009. Human-Tim mostly plays the guitar and sings, while Robot-Tim mostly pushes buttons and dances.  With a little help from some talented friends, they play family-friendly, indie-rockin', slightly twangy electro-folk music. Find out more about the duo & listen to their debut album “Pop Of the Tots” HERE!

Human Tim sat down for an interview with ChiIL Mama! Watch the interview HERE! 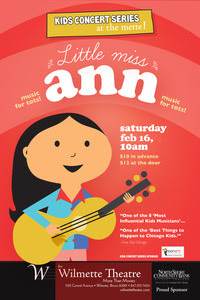 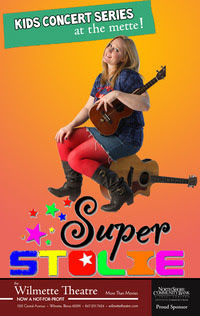 A Super Stolie children's show is high-energy, with interactive music and movement performance that gets kids thinking and singing about everything from spelling to animals, numbers, shapes and sounds while they move and shake to get all their wiggles out. Appropriate lyrically for all ages, but with enough "cool" for even those in the double-digits, a Super Stolie performance shows you that it's impossible to be bored when there's music involved! The show incorporates both traditional songs that you're bound to know plus catchy originals by Stolie that you'll be singing along to instantly. Couple that with a little dancing, instruments to play and bubbles to chase, and you'll be high-fiving all the way home!

Super Stolie debuted on the children’s music scene in 2006 by accident at a school fundraiser. By early 2009, Stolie had written enough material for an album and released When I Grow Up, her first collection of original music for children.  Recorded in her home studio, Super Stolie performed on guitar, piano, ukulele, bass, harmonica, djembe, all while singing vocals.  The result is a full band-sounding kindie album, glittered with Stolie’s lyrical wit and has parents laughing, toddlers tongue-twisting, and has also proven to lull the little ones to sleep in the back of the car. Super Stolie's second children's album, Press Play!, was released in November 2012 and is available now fromwww.superstolie.com

Watch music videos HERE, or listen to select tracks from both CDs HERE!

And read Stolie's interview with Time Out Chicago KIDS HERE!

Tickets $10 advance, $12 at the door
Saturday, March 23 @ 10:00am
OR Order a VIK Pack (Very Important Kid), gaining you access to 4 of our 2013 Concerts for only $26
Tickets available online at www.wilmettetheatre.com

About Wilmette Theatre:
Steps away from the METRA and accessible by CTA public transportation, located in the heart of downtown Wilmette in the beautiful North Shore suburb area of Chicago.

Disclosure:   Thanks to Wilmette Theatre for providing tickets for our giveaways.
Posted by Bonnie Kenaz-Mara at 12:53 PM