Concerts for Kids Rock at Beat Kitchen every Sunday at Noon! 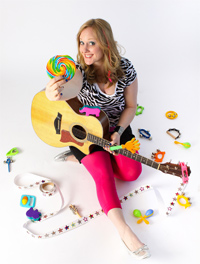 Super Stolie and The Rockstars, March 11
Spring Forward with us at Beat Kitchen!

Super Stolie and The Rockstars are a Chicago-area musical band of grown-ups playing rockin' songs for kids! Rebecca 'Super Stolie' Stoelinga leads the band playing guitar and singing. She's released 4 albums of original singer-songwriter material since 2000 and has toured the whole country, but most recently offered her first collection of tunes for kids, When I Grow Up (2009), and is actively performing around Chicagoland for public events and private birthday parties -- over 100 shows in 2011!    ChiIL Mama gave away free copies of When I Grow Up to some of our lucky readers in the past.    Did you win?    Enter here for our current KINDIE LAND CD GIVE AWAY-WORTH OVER $60 (includes multiple CDs/DVDs by Suzi Shelton, Little Miss Ann & Bari Koral!!).

While a second Super Stolie children's album is due summer 2012 and the band has been slowly introducing new songs at their more recent shows, Super Stolie fans have been requesting all their favorites from the first disc! So, for their show on Sunday March 11th, Super Stolie and The Rockstars will play ONLY songs from the CD! Plus, the fans get to write the setlist! Vote now for your favorite songs: http://www.superstolie.com.

We promise there will still be plenty of singing, dancing and "Rockstar Jumping!"

PS: Remember to set your clocks forward an hour at 3:00am on Sunday morning (or Saturday night!) and be sure to wake up in time for the show!

If you missed Human Tim + Robot Tim with their noisy friends when they played Beat Kitchen in October, you really ought to try to make it March 18th. The noisy friends include three mad scientists who appear to be human and play drums, guitar, sing and generally make for a truly excellent show.

Tim Knuth, the leader of this motley crew of robot and mad scientists, lives in Chicago with a human wife and human child. He plays and sings with kids and their grown-ups at the Old Town School of Folk Music, and he writes and records music in his Secret Electrical Music Cave, using a shiny new computer and a lot of dusty old instruments.

Robot-Tim is a music-helping robot. He controls drums and other noises and is a remarkably graceful dancer. He sleeps standing up. Robot-Tim's performance would not be possible without the assistance emminent robotologist, Dr. Graham Metzger.

Save the Dates...And enter here to win 4 tickets to each Beat Kitchen Concert for kids at ChiILMama.com!   New winners picked weekly.

Congrats again to Lori M. who won our 4 tickets to Super Stolie this week!

Check out our hot and happening Concerts for Kids! lineup
Beat Kitchen, 2100 W. Belmont
shows at noon on Sunday
$6/person

To keep up to date with Concerts for Kids, become our Facebook friend at
www.facebook.com/kidsshowschicago.

Beat Kitchen says special thanks to our sponsors: