Where else can you currently see 8 actors take on upwards of 50 characters in two interrelated shows?!

Redtwist Theatre is one of our local favorites, with a long string of Jeff recommended productions, and an intimate performance space.   They've got a new entry way into their black box space, off the front lobby now, and a thought provoking show that provides a new entry way into the hot button issue of how hate impacts society.  We've been promoting The Laramie Project:  Ten Years Later since February, on our Facebook and Twitter streams, but if you still haven't seen it yet, you just have until April 7th to check it out.

We were blown away by Red Twist's current and incredibly timely offering, The Laramie Project:  Ten Years Later.   The choice of simple costume pieces ...glasses here, a tie there, and the presentation of the show on a bare bones set, only serve to accentuate the immensity of the content.   Thirteen years after the horrific beating death of Matthew Shepard, hate crime protection has finally been enacted on the federal level by President Obama, after his two predecessors failed, yet hate crimes, harassment and bullying are still increasing.  As Matthew's mother so eloquently states, "These plays are not about being gay.  They are about being hurt for being different, or perceived to be different, whatever that difference may be."    As the right wing amps up the hate rhetoric to the point where gay teen suicides are in the news frequently and bullies feel sanctified in their violence against others, this production's message is as urgent as ever.

I was saddened though not surprised by the townspeople's collective amnesia, and eagerness to spin history to support a more palpable view of themselves.   A mere ten years later, people who once saw irrefutable court room proof of a heinous, lethal gay bashing, bandied about victim blaming falsehoods about a drug deal gone bad.   Who wants to openly identify with a homicidal homophobic town where peaceful college students are killed for pocket change and partner preferences?   It seems a robbery co-opted into a hate crime by liberals, to advance their politics, is an easier lie to believe.

On a parallel note, my husband's presently on a TV shoot with someone who was a student at Columbine during the shootings, and she recently met with similar resistance and hostility when she wanted to make a 10 year documentary.   Even as an insider, many of her classmates refused to talk to her and were adamantly against the project.   People wanted to forget and not dredge up the past, and gave her so much resistance that the project may not advance.

Still, for all the haters and amnesiacs, there is an encouragingly dogged group in Laramie and beyond, still making sure Matthew's death meant something, and will make a difference for future generations.  The scene of the gay marriage political debate and vote gave me hope, as well.   Even with our current two steps forward, one step back, politics in 2012, there are still leaders who will cross conservative and liberal lines and party views to vote with wisdom and compassion.   This courageous and vital set of shows spread the message to that many more people.   Suggested for adults audiences and mature teens.   Highly recommended. 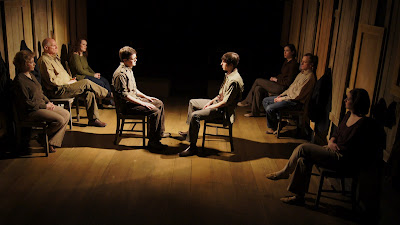 
The Laramie Project: Ten Years Later
By Moisés Kaufman, Leigh Fondakowski, Greg Pierotti, Andy Paris, and Stephen Belber
Directed by three-time Jeff Award-winner, Greg Kolack
The ten-year epilogue is a companion piece to the iconic, The Laramie Project,
one of the most-produced plays in the U.S. and around the world.


HISTORICAL FACTS OF THE STORY
On October 6, 1998, a gay University of Wyoming student, Matthew Shepard, left the Fireside Bar in Laramie, Wyoming, with Aaron McKinney and Russell Henderson. The following day he was discovered at the edge of town. He was tied to a fence, brutally beaten, and close to death.

By the following day, Matthew's attack and the town of Laramie had become the focus of an international news story. On October 12, 1998, Matthew Shepard died at Poudre Valley Hospital in Ft. Collins, Colorado.

On November 14, 1998, the members of Tectonic Theater Project traveled to Laramie, Wyoming, and conducted interviews with the people of the town. During the next year, Tectonic would return to Laramie several times and conduct over two hundred interviews. The play that resulted is edited from those interviews, as well as from journal entries by members of the company and other found texts.

PRODUCTION HISTORY OF BOTH PLAYS
The Laramie Project premiered at The Ricketson Theatre, performed by the Denver Center Theatre Company in February, 2000. It was then performed at the Union Square Theater in New York City, before a November, 2002, performance in Laramie, Wyoming. The play has also been performed by high schools, colleges, and community theaters across the country, as well as professional playhouses around the world. In addition, the HBO film directed by Moisés Kaufman, premiered at the Sundance Film Festival in March, 2002.

The Laramie Project: Ten Years Later is the epilogue to the original. Ten years after Shepard's murder, members of the Tectonic Theater Project returned to Laramie to conduct follow-up interviews with residents featured in the original play. Those interviews were turned into this companion piece. The play debuted as a simultaneous reading at nearly 150 theatres across the US and internationally on October 12, 2009 - the 11th anniversary of Matthew Shepard’s death. Most of the theaters were linked by webcam to New York City where Judy Shepard and the play's producers and writers gave an opening speech to begin this unique memorial and evening of theater.

DIRECTOR
Greg Kolack, former Artistic Director of Circle Theatre, has won three Jeff Awards as Best Director, most recently for columbinus, at Raven Theatre. Greg has been interested in directing these two projects together since the nationwide reading in 2009. Several years ago, he visited Laramie to gather research for the project. On January 6, 2012, Greg made his second trip to Laramie on the cusp of the rehearsal period, to meet with various real-life characters depicted in The Laramie Project. His travelogue, reported via email to the cast each evening was filled with first-person reports shared by the locals who lived through the experience, and who shared with Greg their unique insights and poignant reflections on the events over thirteen years ago that catalyzed tectonic change in our society. Greg’s diligent research and his eye for detail as an award-winning director, will surely inform and enliven this production with a unique theatrical style.

REDTWIST PRODUCTION
Both shows will be performed by only eight actors, who portray dozens of roles in our signature, intimate space. The actors and director have personally talked with the real characters in the play, and also with members of the Tectonic Theater Project. A number of post-show discussions are scheduled for groups and upon special request.

Redtwist is located at 1044 W Bryn Mawr, 2 blks W of LSD, 2 blks E of the Red Line El station. Street parking (paybox/meters until 9pm) is available on Bryn Mawr, side streets, and Broadway. Please reserve 48 hours in advance. Credit cards accepted by phone and via Paypal to guarantee seating.
Posted by Bonnie Kenaz-Mara at 7:00 PM