is now available on Digital and will be out on 4K Ultra HD, Blu-Ray and DVD on December 13th. 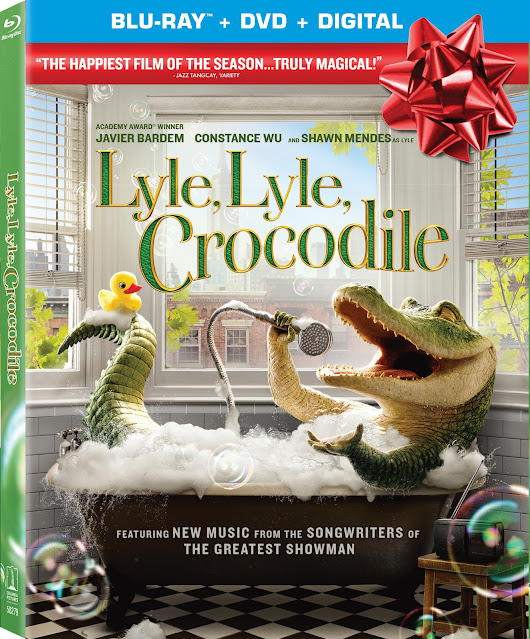 When the Primm family moves to New York City, their young son Josh struggles to adapt to his new school and new friends. All of that changes when he discovers Lyle - a singing crocodile who loves baths, caviar and great music - living in the attic of his new home. The two become fast friends, but when Lyle’s existence is threatened by evil neighbor Mr. Grumps, the Primm’s must band together with Lyle’s charismatic owner, Hector P. Valenti, to show the world that family can come from the most unexpected places and there’s nothing wrong with a big singing crocodile with an even bigger personality.

Sing-Along Songs: Karaoke versions of the original songs “Top of The World,” “Rip Up the Recipe,” “Take a Look at Us Now,” and “Carried Away” from Pasek & Paul (The Greatest Showman).

Storytime with Shawn Mendes & Javier Bardem: Shawn Mendes, Javier Bardem, alongside the cast and filmmakers alternate reading excerpts from the book that set the world of Lyle, Lyle, Crocodile in motion.

Croc and Roll – Lyle On Set: We will find out what working with Lyle was truly like with interviews with his castmates and the filmmakers.  As they shed light on everything from Lyle’s eating habits to his occasional odor issues, we’ll come to get a better understanding of what Lyle brings to the filming experience beyond his incredible voice.

Take a Look at Us Now – The Cast: From Javier Bardem, Constance Wu, Scoot McNairy and Winslow Fegley to Shawn Mendes, meet the incredible key cast of Lyle, Lyle, Crocodile.

Two Music Videos: “Top of the World” and “Carried Away” by Pasek & Paul (The Greatest Showman).

Croc and Roll – Lyle On Set

Take a Look at Us Now – The Cast