The Chicago Premiere of a New Mo Willems Musical

Here at ChiIL Mama, we had the opportunity to meet Morgan Tayler, children's musician, father, and brilliant composer and lyricist of Peabody, many times over the years, starting way back in 2009. It was a pleasure to shoot photos and videos of him in concert at Chicago's Schubas, and partner up many times on giveaways for our readers. We were sad to hear that Morgan Taylor recently passed away from Covid complications:

We're happy to say his legacy lives on in his work, and the world premiere of Peabody will be presented in Morgan Taylor’s honor.

All performances take place at The Greenhouse Theater Center, 2257 N. Lincoln Ave. Tickets on sale September 1, 2022. For ticket purchases and more information, visit yptchi.org or call the box office at 773 404 7336.

In residence at the historic Greenhouse Theater Center, YPT produces the highest quality professional theatre for children of all ages and backgrounds. The company also plans to introduce performance and training opportunities for kids. Founding Artistic Director Randy White has directed extensively in New York and at regional theatres across the country. Mr. White was the founder of Cardinal Stage in Bloomington, IN, where he launched the extraordinarily successful “Cardinal for Kids” series.

“Last year’s Knuffle Bunny was a hugely successful first outing for YPT,” says Mr. White. “Now, as we get ready for our first full season of work, the company is focused on bringing original and innovative theatre to Chicagoland’s children and families. We’re excited to partner with community organizations, parents, impassioned educators, and local business leaders to make it possible for local children of all ages and backgrounds to experience and participate in a wide range of transformative theatrical experiences!” 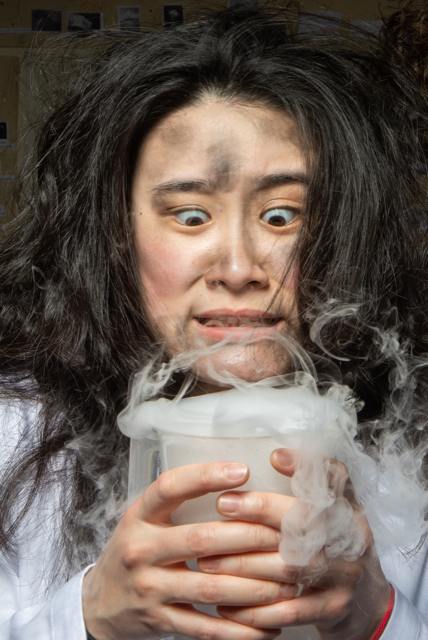 A World Premiere
Oct. 29 – Nov 20, 2022
Press Performance: Saturday, Oct 29 at 10am
Book by Glen Berger
Music and Lyrics by Morgan Taylor
Directed by Randy White
Performance Schedule: Fridays at 7pm; Saturdays at 10am and 1pm; Sundays at 1pm (added 10am performances on final two Sundays)
Tickets: $25 / $19 (under 12)
Appropriate for ages 5+ 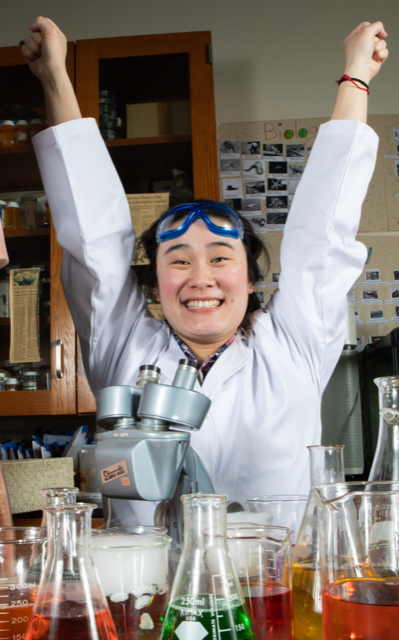 Why do apples fall? Question the obvious and you change the course of history! Or in the case of 11-year-old Alyssa Peabody, you spark pandemonium at your middle school science fair!

A rollicking musical comedy that gives new meaning to the term Science Whizz! 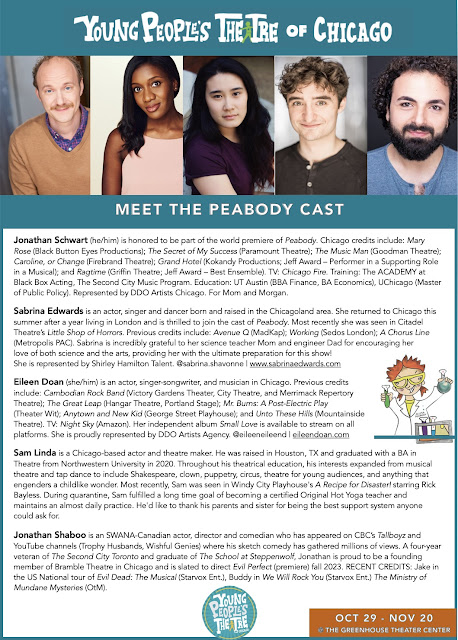 Glen Berger’s (book) plays include Underneath the Lintel (450 performances Off-Broadway, 350 productions worldwide). TV credits include two Emmy Awards and 200+ episodes for the PBS children’s series, Arthur. Glen was co-bookwriter for Spider-Man: Turn Off the Dark (directed by Julie Taymor, music by Bono and The Edge of U2). His memoir Song Of Spider-Man—the harrowing tale of Turn Off the Dark’s creation—was published by Simon & Schuster.

Morgan Tayor (music & lyrics) is a Grammy-nominated composer and the creator of the popular multimedia Gustafer Yellowgood project. In addition to his off-Broadway work, Morgan has toured and/or worked with Wilco, Duncan Sheik, Lisa Loeb, and others. 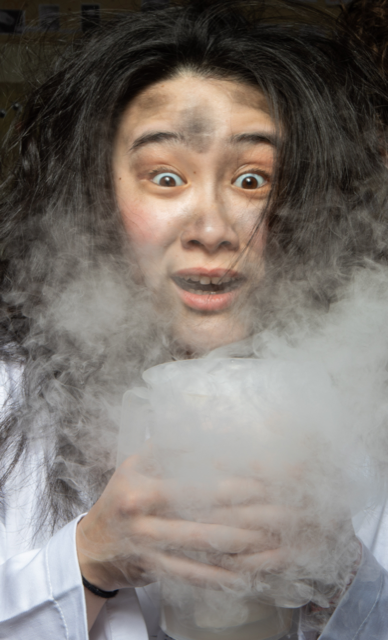 Poor Pigeon never gets to do anything! But when Bus Driver is running late (gasp!), Pigeon’s dream to drive the bus might actually come true! From the vivid imagination of Mo Willems comes an interactive romp with every child’s favorite high-strung bird!

As the Inaugural Kennedy Center Education Artist-in-Residence, Mo Willems adapted his own 2004 Caldecott Honor award-winning book in 2019 and critics in DC and across the country have raved:

John Glore (playwright/adaptor) is an award-winning playwright whose work for young audiences includes adaptations of A Wrinkle in Time, The Stinky Cheese Man and Other Fairly Stupid Tales, The Night Fairy, Kate DiCamillo's Flora and Ulysses, and many. His work for children and adults has been produced at Berkeley Rep, Actors Theatre of Louisville, The Round House Theatre, The Children's Theatre Company, First Stage, Childsplay, and others.

Abby Hanlon (book author) is the author and illustrator of Dory Fantasmagory, a series of chapter books for five to nine year olds. Dory was named a Best Book of the Year by Kirkus, Publishers Weekly, and Parent's Magazine. It won a Golden Kite Honor for Fiction and is an American Library Association Notable Book. The books have been translated in twenty-two languages and are Junior Library Guild selections. Abby also taught creative writing and gradeschool in the New York City public school system.

Randy was the Founding Artistic Director of Cardinal Stage in Bloomington, IN. Under White’s leadership, Cardinal grew into Southern Indiana’s largest arts organization. A champion of children’s theatre, White also inaugurated the extraordinarily successful “Cardinal for Kids” series–which played to 100,000 kids in just 7 years. White was also gratified to work with 100+ extraordinarily talented Chicago actors, designers, and directors while at Cardinal.

In NYC, White directed Theatreworks USA’s Max and Ruby, a new children’s musical that played off-Broadway and toured nationally. He directed the 15-month off-Broadway run of Glen Berger’s Underneath the Lintel, assisted on Disney’s The Lion King, and was Resident Director at New Dramatists. Regionally, White has directed at Shakespeare Santa Cruz, Portland Center Stage, Actors Theatre of Louisville, etc. As an educator, White has directed and/or taught for the Yale Dramat, University of Pennsylvania, Indiana University, University of Minnesota/Guthrie, University of Alberta, Fordham, NYU, etc.

In Chicago, White directed The Wizard of Oz at the Children’s Theatre of Winnetka and Curious George and Knuffle Bunny at Northbrook Theatre. For the Greenhouse Theater, White directed Truman and The Birth of Israel and was nominated for an Equity Jeff Award for his critically acclaimed production of Midsummer (A Play with Songs). White holds an MFA in directing from the University of Alberta in his native Canada. 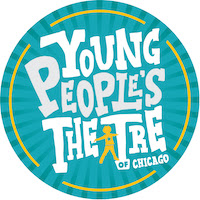 THE YOUNG PEOPLE’S THEATRE OF CHICAGO

The Young People’s Theatre of Chicago. YPT was established in early 2020 but significantly Covid-delayed. It wasn’t until late 2021 that YPT launched with a successful production of Mo Willems’ Knuffle Bunny —

— "Will your kids be entertained? The answer (spoiler alert!) is ‘YES’— judged by the happy vocal reactions of the kids at the matinee I attended! A solid debut!” —Chicago Reader

— “Vivacious… packs a big punch. If you have a little one in your life, be sure to bring them to see this fun, funny musical. This first production of YPT is a sign of good things to come.”  —Splashmags

YPT’s follow up production of the science-themed musical comedy Peabody was postponed by multiple Covid cases in the first weeks of rehearsal. But we persevere! The world premiere of Peabody will launch YPT's 3-play 2022-2023 season. And then in the New Year we build on Knuffle Bunny’s success with the Chicago premiere of Mo Willems’ adaptation of his own award-winning and best-selling Don’t Let the Pigeon Drive the Bus!  The inaugural season wraps up in the spring with a world premiere adaption of Abby Hanlon's award-winning Dory Fantasmagory.

These two bookend world premiere productions suggest an exciting future for YPT—a future that foregrounds commissions and the development of exciting new work for children of all ages.

Young People’s Theatre of Chicago (YPT) offers high-quality productions and performance/education opportunities for children of all ages and backgrounds. Housed in the historic Greenhouse Theater Center, YPT launched in the fall of 2021. The company’s inaugural 3-Play 2022-23 season features two exhilarating world premieres, along with the Chicago premiere of a new musical by America’s most popular children’s author!

YPT’s Managing Artistic Director Randy White noted that, “as we prepare for this inaugural season, YPT is focused on partnering with community organizations, parents, educators, and local business leaders to provide thrilling and transformative theatre experiences for children from Lincoln Park and surrounding neighborhoods. These community partners will make it possible for local children of all ages–from toddlers to teenagers–to experience theatre that entertains, empowers, educates, and inspires.”