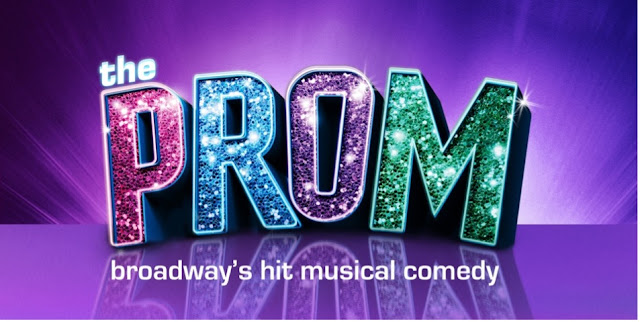 EVERYONE DESERVES A CHANCE TO CELEBRATE!

THE PROM will play Broadway In Chicago’s Cadillac Palace Theatre (151 W. Randolph St.) for a limited one-week engagement April 19-24, 2022. I'll be there opening night, so check back soon for my full review.

Everyone’s invited to the joyous Broadway hit that New York Magazine hails as “smart and big-hearted” while The New York Times declares it “makes you believe in musical comedy again!” THE PROM is a musical comedy about big Broadway stars on a mission to change the world and the love they discover that unites them all.

Variety raves, “It’s so full of happiness that you think your heart is about to burst.” And The Hollywood Reporter cheers, “It’s comic gold!”

Viking Books also recently announced that Saundra Mitchell, author of over twenty books for tweens and teens, has written the YA novelization of the hit Broadway musical comedy, THE PROM to adapt the new original musical into a reading experience that reflects the energy and humor of the show, and echoes its message of acceptance and inclusion. The book was published on September 10, 2019 with Viking Children’s Books, an imprint of Penguin Young Readers.

THE PROM made its world premiere at The Alliance Theatre, Atlanta, GA, Susan V. Booth, Artistic Director, in 2016, and played its final performance at the Longacre Theatre on Broadway on August 11, 2019 after playing 23 previews and 310 regular performances.

Individual tickets for THE PROM go on sale tomorrow and range from $31 to $107 with a select number of premium tickets available. Tickets are available now for groups of 10 or more by calling Broadway In Chicago Group Sales at (312) 977-1710 or emailing GroupSales@BroadwayInChicago.com. For more  information, visit www.BroadwayInChicago.com.

COVID-19 Protocol: When entering the theatre, audience members will be required to provide their valid ticket, be masked, and provide valid I.D. (ages 16 and up). Guests, ages 5 and up, will be required to provide vaccination card that proves full vaccination, meaning 14 days after their second dose of a two-dose FDA authorized COVID-19 vaccine or at least 14 days after a single dose vaccine. Those with vaccine exemptions, including children 2 – 4, religious or medical, will be required to provide proof of a negative COVID-19 test along with a photo ID and valid ticket. Acceptable tests are either a PCR test taken within 72 hours of the performance start time or an antigen test taken within 6 hours of the performance start time. No home tests will be accepted. Due to COVID-19 protocol, children under the age of 2 will not be admitted to any Broadway In Chicago Theatre. We are currently not serving or allowing food and beverage inside the theatres to allow audience members to remain masked throughout the performance.