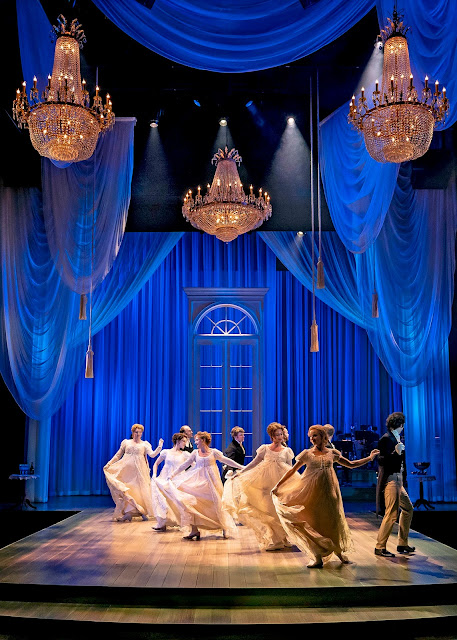 Chicago Shakespeare Theater has been transformed into an elegant playground for the gentry of the early 1800s, complete with chandeliers, copious amounts of billowing bunting, and an on stage quartet. The whirling center of this scene is Jane Austen's infamous Emma, a girl who has charmed readers and audiences across genres, despite her arrogance, classism, and a bit of a mean streak. Her goodnatured, yet misguided, attempts at matchmaking are conducive to a musical, and it's fun to experience the old, familiar story with the addition of song. Like most musicals, humor abounds and love wins out in the end on multiple fronts. 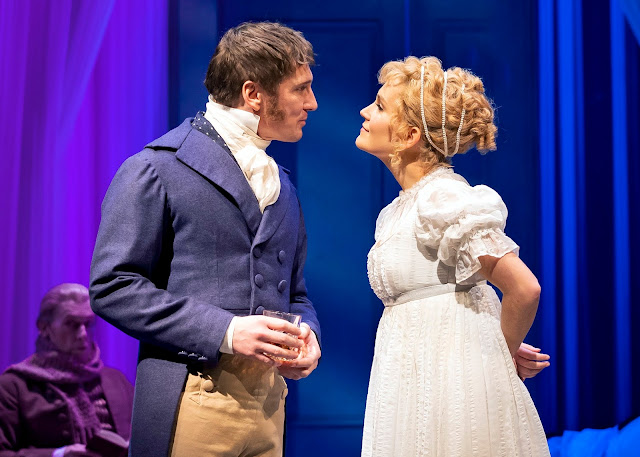 CST's production of Emma is well cast, and the rapport between Emma Woodhouse (Lora Lee Gayer) and Mr. Knightley (Brad Standley) is a joy to see. Their snarky banter and love/hate relationship is adorable and enticing as it evolves on stage. Harriet Smith (Ephie Aardema) is also utterly endearing as lovelorn orphan and Emma's favorite side project, that almost went horribly awry. 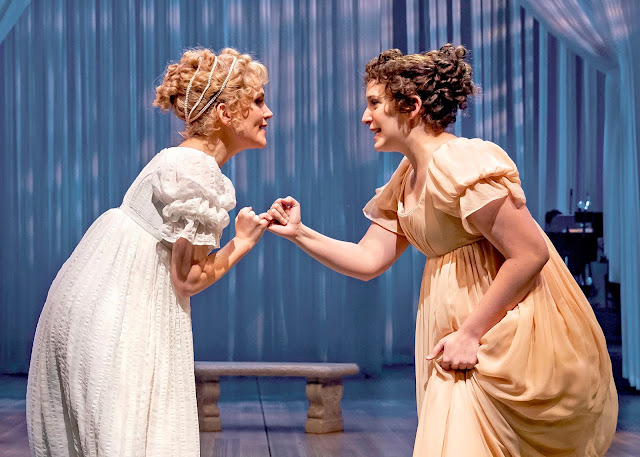 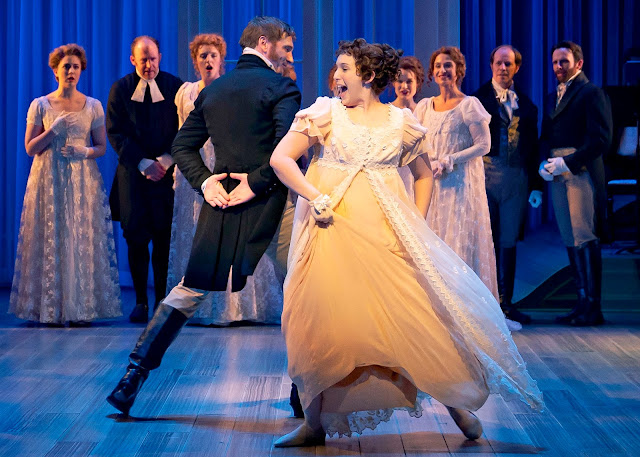 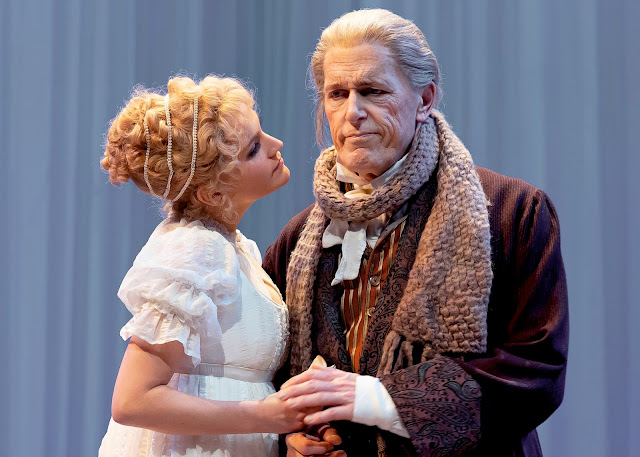 As usual for Chicago Shakespeare Theater, the costumes, staging, lighting, and clever set design are top notch. Jane Austin's brilliance shines through, as her iconic plots and schemes remain true to the original, even as her characters burst into song. If there's a weakness, it's the score. In an otherwise likable adaptation, Paul Gordon's music is thirty one songs that blend into one another, with few peaks and variations. Eight of the songs actually are reprise numbers, but most of the songs in the first act felt too similar to one another to be as engaging as I'd hoped.

There were some exceptions. Second act solos by Mr Knightley and Frank Churchill (Devin DeSantis) were standouts, and Harriet Smith's pining for Mr. Robert Martin had its charm. Emma's piano solo and rivalry with Jane Fairfax (Erica Stephan) were playful and funny.

This twisted tale of romantic entanglements, secrets, misdirection, mistakes and matrimony makes for an enjoyable evening of good old fashioned fun. Emma is a good bet for multigenerational appeal and creating family memories together. Recommended. 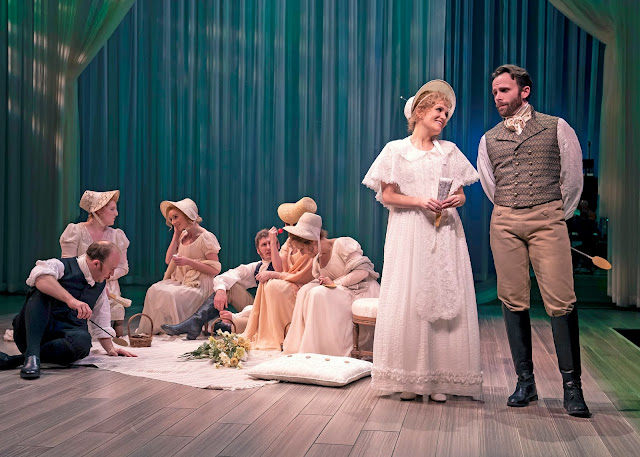 Privileged, pampered, and preoccupied with romance, Emma Woodhouse indulges in her pastime of misguided matchmaking, but is clueless when it comes to her own feelings, especially toward a gentleman named Mr. Knightley. As this imperfect heroine learns that love cannot be predicted or channeled, audiences will be swept away by Paul Gordon’s lyrical melodies in this deliciously charming romantic comedy.

A multi-talented composer, lyricist, and book writer, Gordon has been inspired by classic texts to great success. The Broadway musical Jane Eyre, which he co-wrote, was nominated for five Tony Awards, including Best Musical and Best Score, and Chicago Shakespeare’s world premiere of Sense and Sensibility garnered the Jeff Award for Best New Musical. Gordon’s Daddy Long Legs, written with director John Caird, has enjoyed productions around the world. Of Emma, Gordon shared, “There is a lyricism to the way Jane Austen writes—great melodies within the soul of the piece. The poetic language of the novel makes for a wonderful foundation of a musical and the music triggers your emotions in a profound way.”

Starring as Emma Woodhouse is Lora Lee Gayer. On Broadway, Gayer notably appeared as Linda Mason in the acclaimed 2016 revival of Holiday Inn, the New Irving Berlin Musical. Additional Broadway highlights include portraying Tonia in Doctor Zhivago and Young Sally in the Drama Desk Award-winning revival of Follies starring Bernadette Peters. Regionally, she has made celebrated appearances at Alliance Theatre, Shakespeare Theatre Company, and The Muny.

Brad Standley takes on the role of Mr. Knightley, a well-mannered voice of reason that tempers Emma’s impulsive nature. Standley comes to Chicago fresh off the National Tour of Waitress. His regional credits include productions with Denver Center for the Performing Arts, Idaho Shakespeare Festival, and the Weston Playhouse. An accomplished singer/songwriter, Standley headlines the alternative pop band The Foxflies.

Portraying Emma’s father, Mr. Woodhouse, is Larry Yando. The five-time Jeff Award-winner—named “Best Actor in Chicago” by Chicago Magazine—is a mainstay on Chicago stages and has appeared in more than thirty Chicago Shakespeare productions. Ephie Aardema is Emma’s impressionable young protégé, Harriet Smith. Aardema premiered on Broadway in the original cast of The Bridges of Madison County and has also appeared in Parade at Lincoln Center, Off-Broadway productions of Songbird and Clueless, the Musical, and the first National Tour of Waitress.

Devin DeSantis portrays Frank Churchill, one of Emma’s suitors. DeSantis’ notable roles include Prince Eric in The Little Mermaid and Tommy in The Who’s Tommy at Paramount Theatre, Dr. Frankenstein in Young Frankenstein at Drury Lane Theatre, and Judas in Godspell at Marriott Theatre. Erica Stephan is the charming and accomplished Jane Fairfax, who must find her way in the world without a fortune of her own. Stephan’s major Chicago credits include portraying Betty Haynes in Irving Berlin’s White Christmas at Theatre at the Center, Belle in Drury Lane Theatre’s production of Disney’s Beauty and the Beast, and Cosette in Les Misérables at Paramount Theatre.

For more information, visit www.chicagoshakes.com/emma or on social media at #cstEMMA.

Accessible performances for Emma include:

Open-captioned Performances – Thursday, March 5, 2020 at 1:00 p.m. and 7:30 p.m.
A text display of the words and sounds heard during a play, synced live with the action onstage.
ASL Duo-interpreted Performance – Friday, March 6, 2020 at 7:30 p.m.
All dialogue and lyrics are translated into American Sign Language by two certified interpreters.
Audio-described Performance – Sunday, March 8, 2020 at 2:00 p.m. with optional touch tour at 12:00 p.m. A program that enables patrons who are blind or have low vision to more fully experience live performances by providing spoken narration of a play’s key visual elements. Touch Tours provide patrons who are blind or have low vision the opportunity to experience, firsthand, a production’s design elements.

Emma will be presented January 28–March 15, 2020 in Chicago Shakespeare’s Courtyard Theater. Single tickets ($49–$90) are on sale now. Special discounts will be available for groups of 10 or more. For more information or to purchase tickets, contact Chicago Shakespeare Theater’s Box Office at 312.595.5600 or visit the Theater’s website at www.chicagoshakes.com. 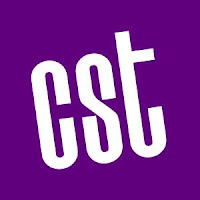 ABOUT CHICAGO SHAKESPEARE THEATER
Under the leadership of Artistic Director Barbara Gaines and Executive Director Criss Henderson, Chicago Shakespeare has redefined what a great American Shakespeare theater can be—a company that defies theatrical category. This Regional Tony Award-winning theater’s year-round season features as many as twenty productions and 650 performances—including plays, musicals, world premieres, family programming, and presentations from around the globe. Chicago Shakespeare is the city’s leading presenter of international work, and has toured its own productions across five continents. The Theater’s nationally acclaimed arts in literacy programs support the work of teachers, and bring Shakespeare to life on stage for tens of thousands of students annually. Each summer, the company tours a free professional production to neighborhood parks across Chicago. In 2017 the Theater unveiled The Yard, which, together with the Jentes Family Courtyard Theater and the Thoma Theater Upstairs, positions Chicago Shakespeare as Chicago’s most versatile performing arts center. 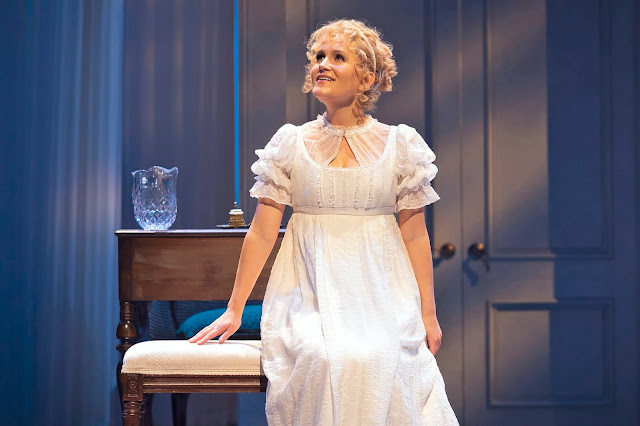