GIVEAWAY and REVIEW: WIN a Pair of Tickets to Grease at Marriott Theatre Now Playing Through March 15, 2020

ChiIL Live Shows on our radar
Grease
It's the energetic and electric musical comedy tribute
to the age of rock ‘n roll! 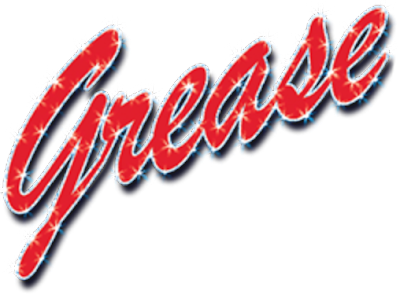 WIN a Pair of Tickets to Grease
(Up to $120 value/2 winners)
at Marriott Theatre
Enter Below
(Winners' choice of dates pending availability.) 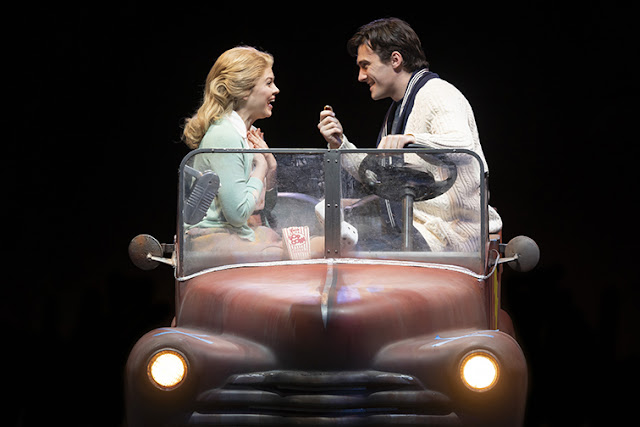 Photo Credit for all: Liz Lauren
Unless Otherwise Noted

Rydell High may be a fond figment of the imagination of author, Jim Jacobs, but the actual inspiration is William Howard Taft High School on Chicago's north west side, where he attended. I was amused to see that Marriott gives props to Taft with a Bryn Mawr street sign, and an Eagles mascot banner, both of which are true, though their real school colors are blue and white. I'm quite familiar with this high school, as my daughter, Sage, tested in to their junior high Academic Center IB program as a 7th grader. She's now a Taft High Junior, where she's been a cheerleader, on poms squad, and in numerous plays. 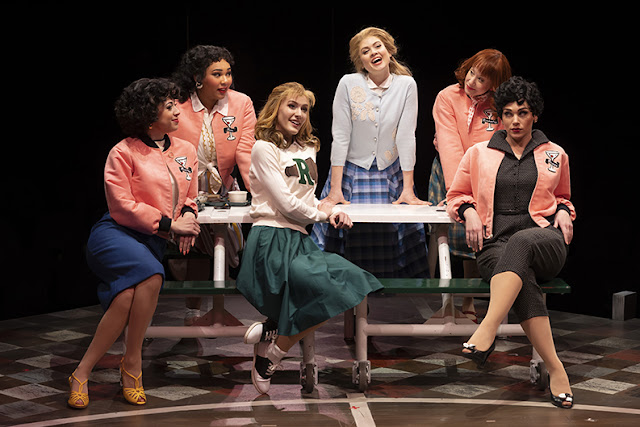 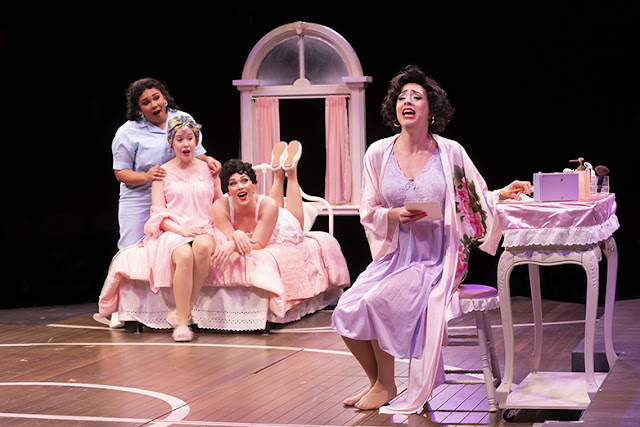 Much has changed since the 1950's, era of the fictional fav, Grease, that first opened at Chicago's Kingston Mines in 1971, yet much remains the same. There are still school dances, cliques, drama, dropouts, cheerleaders, gear heads, partiers, sleep overs and summer love. 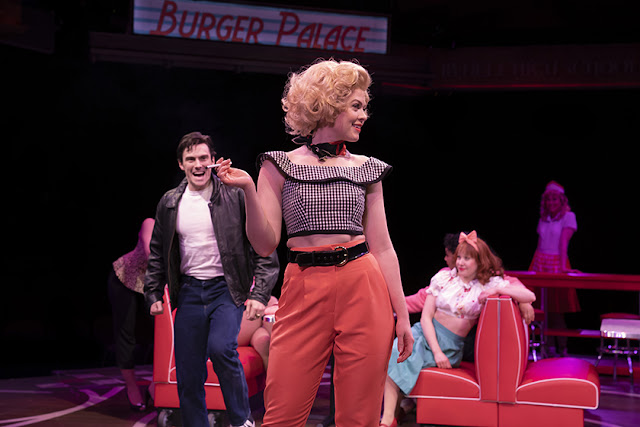 Hopefully, though, in 2020, girls aren't quite so quick to change their entire look and persona for a guy, like the cringeworthy climax of Grease. At least the show has fully fleshed out women characters with hopes, dreams, disasters, failures, unexpected pregnancies, and friendships/rivalries with one another, apart from the men they're dating. That's not always a given, especially in musicals. 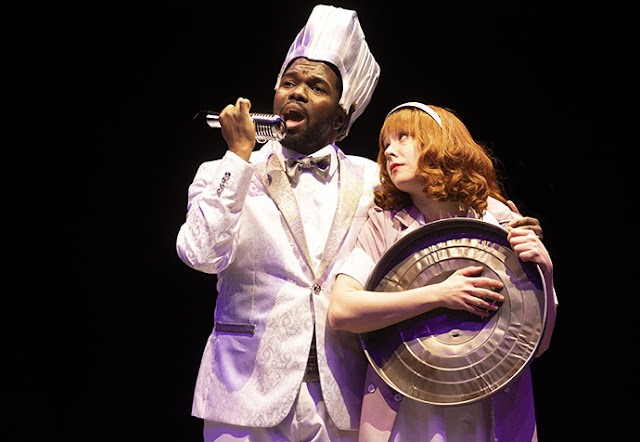 Marriott's period piece is sure to be a fan favorite, with big dance numbers, a talented ensemble, and plenty of eye candy. The Beauty School Dropout number is a particular standout with Jonathan Butler-Duplessis (“Teen Angel”). We also love that Greased Lightening, the beater/ race car wannabe, is actually drivable, and enters and exits the theatre in the round stage during scenes. 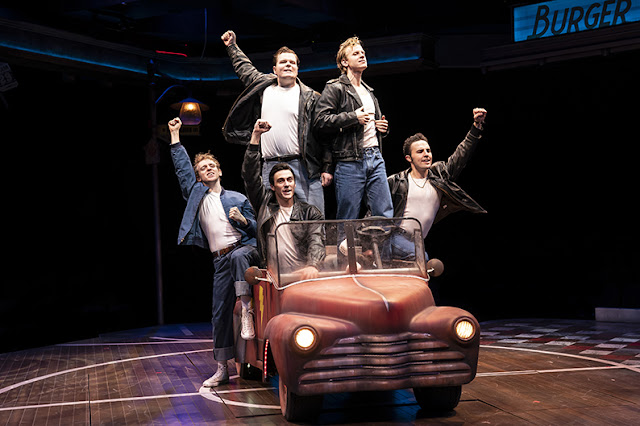 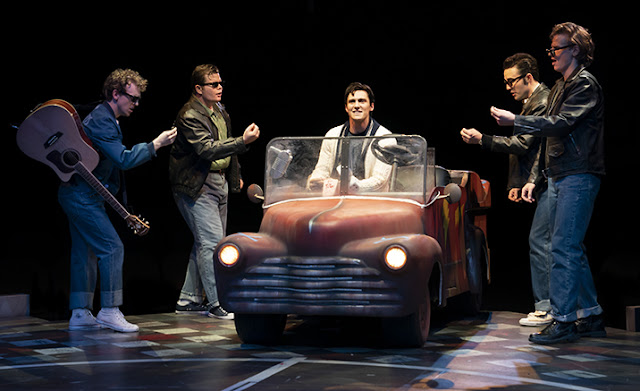 On the down side, we're not crazy about Sandy (Leryn Turlington). Most of the women characters' dialogue and songs, with the exception of Rizzo's (excellently played by Jacquelyne Jones), tend toward a stylized, squeaky register which grates after a while. 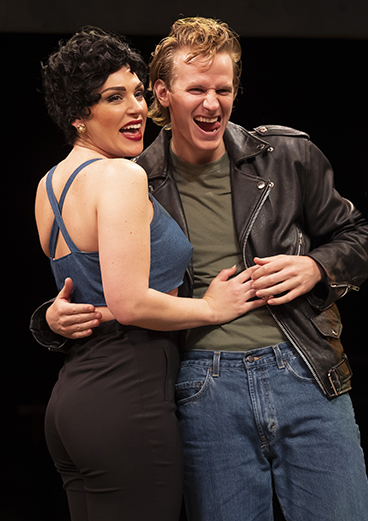 The only one who pulls it off exceedingly well is Landree Fleming as “Frenchy”. She's a joy to see in action. 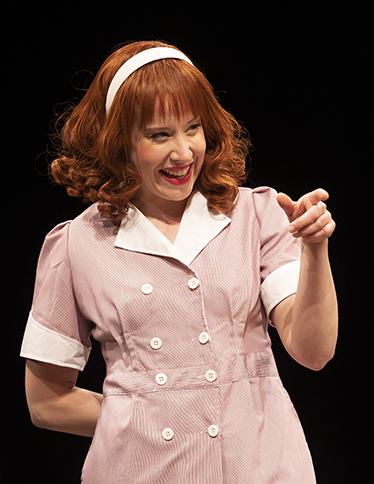 We were also a bit let down that Sandy is the only one doing the big transformation to "greaser gal". In other versions, Danny simultaneously alters his look and lifestyle to "square" to please  her, and that doesn't happen in Marriott's production.

On the up side, the costumes, choreography and casting are overall excellent, especially the men, headed up by charmer, Danny Zuko (Jimmy Nicholas). This retro romp makes for a fun filled evening. The set design, while not as elaborate as many of Marriott's past productions, is clever and provides a perfectly fine playground for this fifties reverie, complete with neon signs. All signs point to a great run and another hit for this stellar, suburban theatre. Recommended. 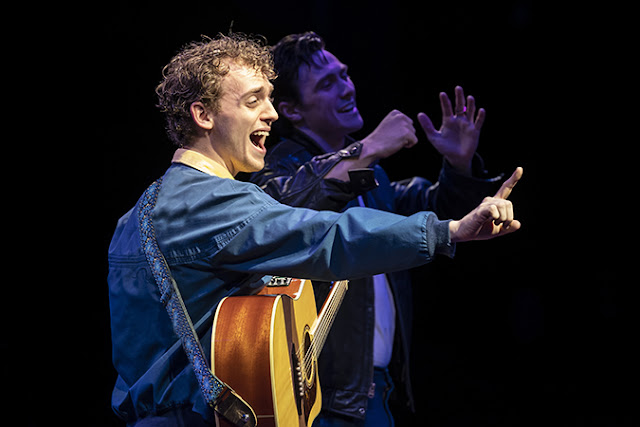 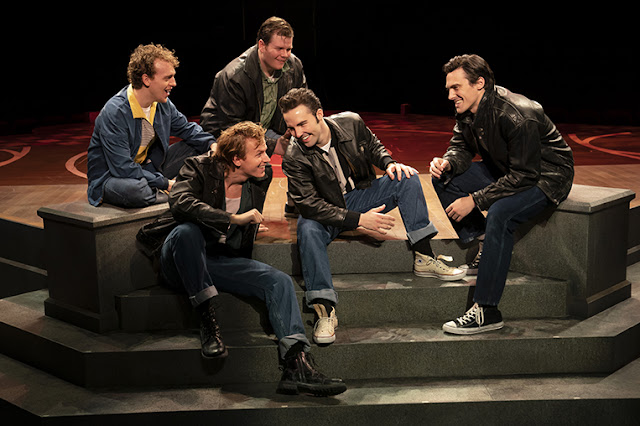 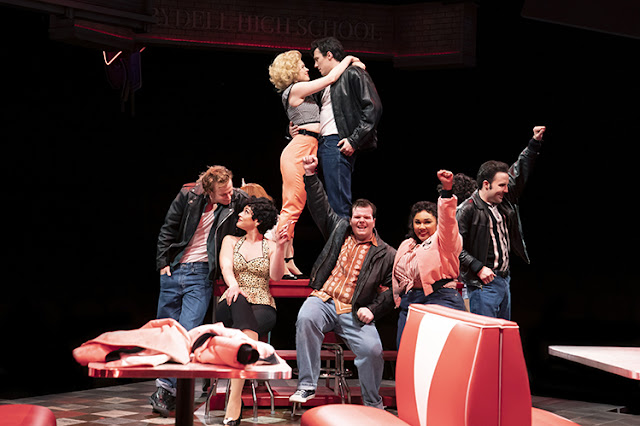 “I grew up on GREASE and getting to direct it for the first time and at the Marriott Theatre is a real thrill,” said director Scott Weinstein. “It premiered here in Chicago nearly 50 years ago and still has so much to say about growing up, teenage rebellion, pop culture and of course, rock and roll. I can't wait to explore this timeless rock musical in the city for which it was meant."

GREASE follows the story of Sandy Dumbrowski, the new girl in town, and Danny Zuko, the school’s coolest greaser, who have a secret romance over summer break away from school. However, when the pair find themselves face to face upon returning to school, everything is different. Sandy attempts to navigate the tricky social circles of Rydell High School and reignite her summer romance, but bad boy Danny is more concerned with maintaining his tough-guy reputation. 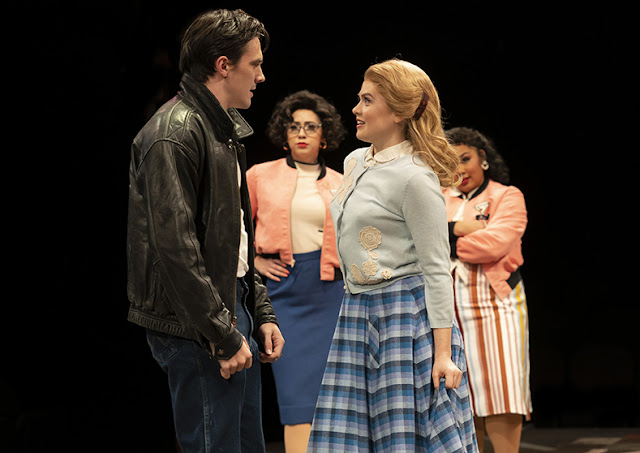 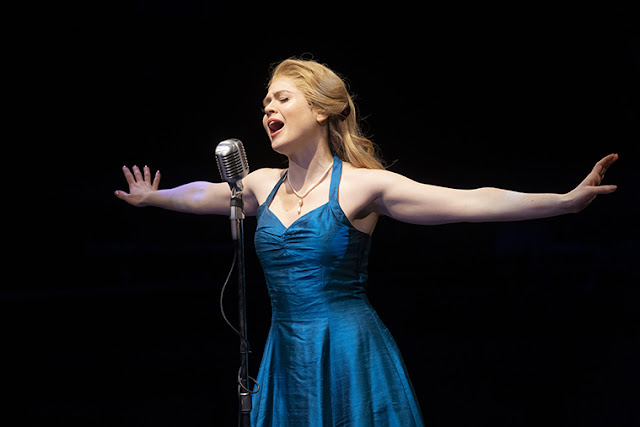 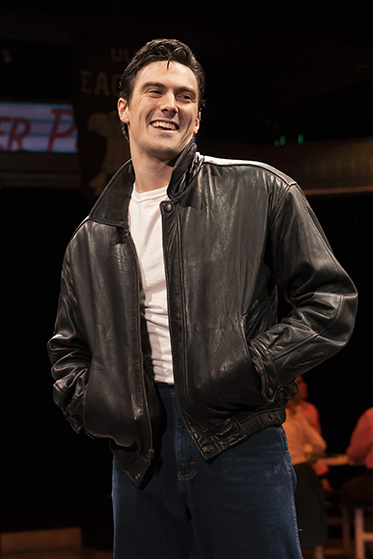 Join in the fun of the hilarious antics of Rydell High's class of '59 and rock to songs like “Beauty School Dropout,” “Summer Nights,” “Hopelessly Devoted to You,” and “You’re the One That I Want.” 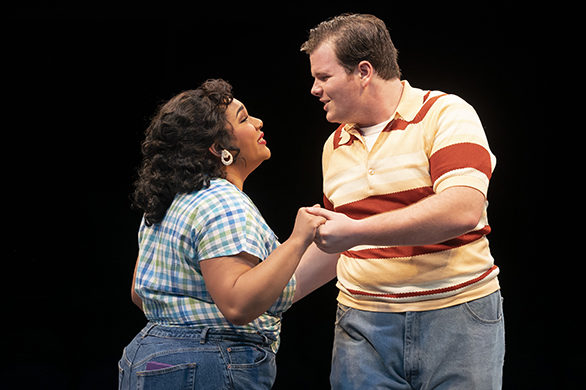 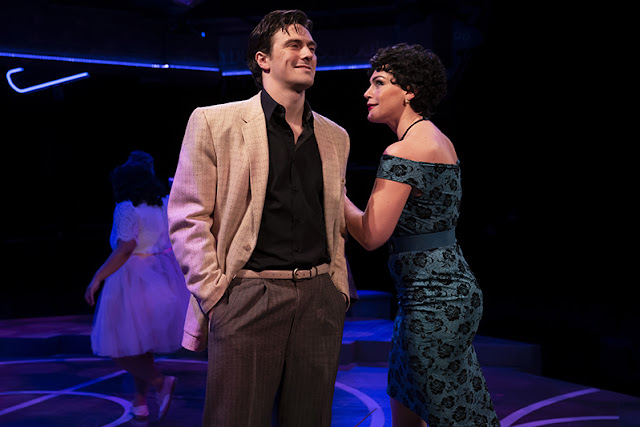 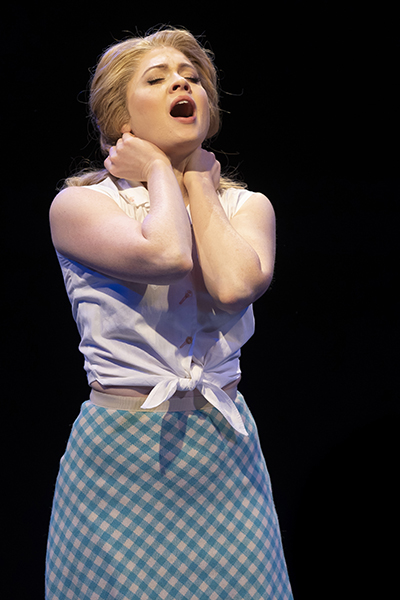 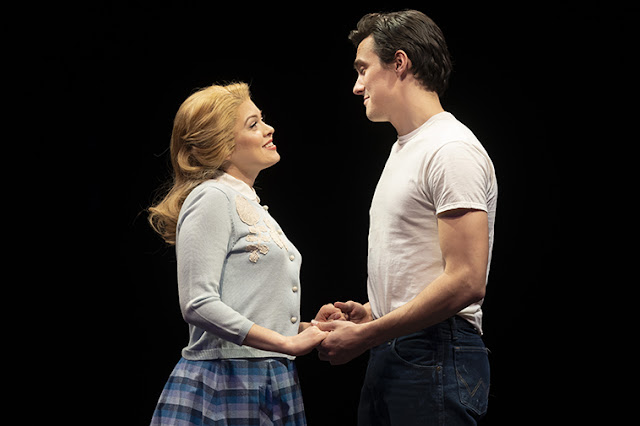 The performance is scheduled to run most Wednesdays at 1 p.m. and 7:30 p.m., Thursdays at 7:30 p.m., Fridays at 8 p.m., Saturdays at 4 p.m. and 8 p.m., and Sundays at 1 p.m. and 5 p.m. Ticket prices range from $50 to $60, excluding tax and handling fees. Call for student, senior, and military discounts. On Wednesday and Thursday evenings there are a limited number of dinner-theatre packages available for purchase through the Marriott Theatre Box Office. To make a restaurant reservation, please call 847.634.0100. Reservations strongly recommended. Free parking is available at all performances.

WIN a Pair of Tickets to Grease
(Up to $120 value/2 winners)
at Marriott Theatre
(Winners' choice of dates pending availability.)
*winners will be asked to share their phone #, address, and e-mail privately with Marriott Theatre's box office in order to redeem their $120 winning ticket voucher. Enter early and often through midnight 2/23/20. Winner will be announced here, on our social media channels and by private e-mail on 2/24/20.