We Are Proud to Present a Presentation
About the Herero of Namibia,
Formerly Known as South West Africa,
From the German Sudwestafrika,
Between the Years 1884-1915 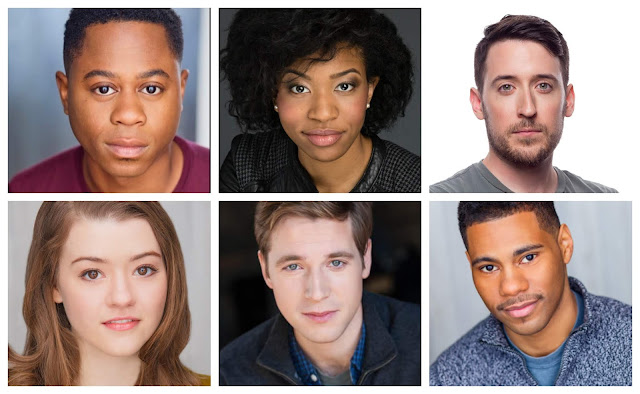 Steppenwolf for Young Adults (SYA) announced full casting for its upcoming production of We Are Proud to Present a Presentation About the Herero of Namibia, Formerly Known as South West Africa, From the German Sudwestafrika, Between the Years 1884-1915 by Jackie Sibblies Drury, co-directed by Hallie Gordon and Gabrielle Randle. It’s the second of SYA’s 2018-19 two-play season which asks, “When You Feel Lost, How Do You Find Your Way?"

When a group of actors gathers together to give a presentation about a long-forgotten—or possibly never remembered—genocide, they realize that summaries based on history books aren’t nearly enough to capture the complexity of human extermination—or human interaction. We Are Proud to Present a Presentation… tells the story of what happens when, in an effort to dig deeper, the nobly intentioned ensemble crashes into their own simmering fears and unconscious prejudices, coming face to face with the potential for brutality in all of us.

Bios
Hallie Gordon (Co-Director) is an Artistic Producer at Steppenwolf and the Artistic Director for Steppenwolf for Young Adults, where she has directed many productions for the program including Monster by Walter Dean Myers; George Orwell’s 1984 and Animal Farm; The Book Thief; To Kill a Mockingbird; and the world premiere of Toni Morrison’s The Bluest Eye at Steppenwolf and Off-Broadway. She directed Steppenwolf’s 2017 production of Hir. She is an ensemble member for Rivendell Theatre where she directed the critically acclaimed Dry land and Eat Your Heart Out.

Will Allan (Actor 3) returns to Steppenwolf where he has performed in SYA productions of A Separate Peace and Animal Farm - as well as mainstage productions of Good People, The March, and The Flick. Other Chicago credits include: Ah, Wilderness!, The Seagull, and Dartmoor Prison (Goodman Theatre); The History Boys (TimeLine Theatre); The Whale (Victory Gardens Theater); The Goat Or, Who Is Sylvia? (Remy Bumppo); Circumference of a Squirrel (Greenhouse Theater Solo Celebration); and more. Regionally, he has worked with Milwaukee Rep, Indiana Rep, Cardinal Stage, and The Human Race Theatre Company. TV credits include Chicago Justice and the current season of Chicago Fire. He is a graduate of North Central College in Naperville, Illinois and is a Company Member with TimeLine Theatre Company.

Jeffery Owen Freelon Jr. first made an appearance at Steppenwolf as part of the LookOut Series in The New Colony’s Byhalia Mississippi. Owen also understudied the role of Kitch in Antoinette Nandi’s Passover. Other Chicago credits include Loy Webb’s The Light (The New Colony), Wonder In My Soul (Victory Gardens), and The American Revolution (Theater Unspeakable) He is proudly represented by Paonessa Talent Agency.

Tour to Community Centers
SYA will be touring this production of We Are Proud to Present a Presentation… for a week to community centers in partnership with our City Connections partners. Tour locations and dates TBA soon.

Steppenwolf Theatre Company is the nation’s premier ensemble theater. Formed by a collective of actors in 1976, the ensemble represents a remarkable cross-section of actors, directors and playwrights. Thrilling and powerful productions from Balm in Gilead to August: Osage County—and accolades that include the National Medal of Arts and 12 Tony Awards—have made the theater legendary. Steppenwolf produces hundreds of performances and events annually in its three spaces: the 515-seat Downstairs Theatre, the 299-seat Upstairs Theatre and the 80-seat 1700 Theatre. Artistic programming includes a seven-play season; a two-play Steppenwolf for Young Adults season; Visiting Company engagements; and LookOut, a multi-genre performances series. Education initiatives include the nationally recognized work of Steppenwolf for Young Adults, which engages 15,000 participants annually from Chicago’s diverse communities; the esteemed School at Steppenwolf; and Professional Leadership Programs for arts administration training. While firmly grounded in the Chicago community, nearly 40 original Steppenwolf productions have enjoyed success both nationally and internationally, including Broadway, Off-Broadway, London, Sydney, Galway and Dublin. Anna D. Shapiro is the Artistic Director and David Schmitz is the Executive Director. Eric Lefkofsky is Chair of Steppenwolf’s Board of Trustees. For additional information, visit steppenwolf.org, facebook.com/steppenwolftheatre, twitter.com/steppenwolfthtr and instagram.com/steppenwolfthtr.
Posted by Bonnie Kenaz-Mara at 5:33 PM

Email ThisBlogThis!Share to TwitterShare to FacebookShare to Pinterest
Labels: Steppenwolf for young adults, We Are Proud to Present a Presentation About the Herero of Namibia Formerly Known as South West Africa From the German Sudwestafrika Between the Years 1884-1915