OPENING: The Curious Incident of the Dog in the Night-Time Launches Steppenwolf for Young Adults' 2018-19 Season

The Curious Incident of the Dog in the
Night-Time
Adapted by Simon Stephens
Directed by Jonathan Berry
October 5 – October 27, 2018 in the Downstairs Theatre 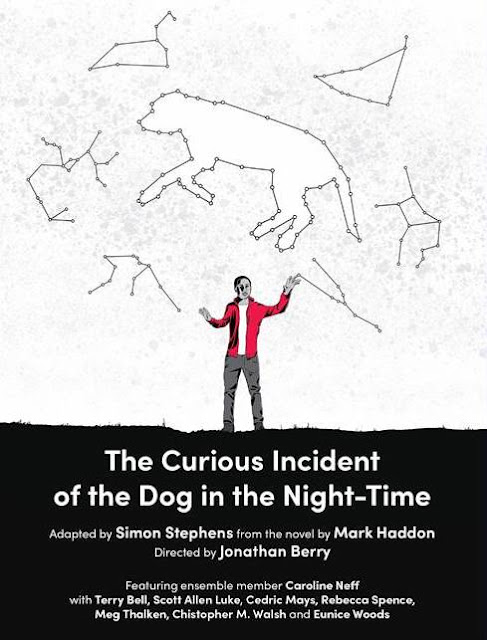 Here at ChiIL Mama and ChiIL Live Shows, we're beyond excited about SYA's season opener. My daughter read the book for school and I joined her and read it too. We both loved it and can't wait to see Steppenwolf's take on this compelling story. I'll be out for the press opening on October 6th, so check back shortly after for my full review.

Single tickets ($20-$30) are now on sale through Audience Services at 312-335-1650 orsteppenwolf.org. Weekday performances are reserved for school groups; more than 15,000 Chicago Public School students will experience the production. More info at steppenwolf.org/education.

“The beautiful beating heart of this story, for me, has always been the journey of a broken family struggling through a remarkably difficult moment and discovering how to be whole again.  The Steppenwolf for Young Adults (SYA) production allows for us to be fully in conversation with the rewards and challenges inherent in these relationships, journeying with the remarkable Christopher as his world breaks apart and then reforms anew.  I’m so thrilled to be working on this play with this incredible team of actors and designers, and can’t wait to share it with the SYA audiences,” comments director Jonathan Berry.

Bios
Jonathan Berry (Director) is an Artistic Producer at Steppenwolf and a director and teacher in Chicago. Steppenwolf productions include You Got Older, Constellations, The Crucible, Gary and A Separate Peace. Berry is a Steep Theatre ensemble member where productions include Birdland, Earthquakes in London, Posh, If There Is I Haven’t Found it Yet, The Knowledge, Festen, Moment and The Resistible Rise of Arturo Ui. He’s also an ensemble member at Griffin Theatre where productions include the Harvest, Winterset, Pocatello, Balm in Gilead, Golden Boy, Spring Awakening, Punk Rock, Port and On the Shore of the Wide World. He has served as the Assistant Director for Anna D. Shapiro’s Broadway productions of Of Mice and Men and This Is Our Youth. Other theatre credits include Dirty, Suicide, Incorporated, Othello(Gift Theatre); The Solid Sand Below, The World of Extreme Happiness for New Stages (Goodman Theatre); Kill Floor (American Theater Company); Little Shop of Horrors, Sideman (American Blues Theater); I am Going to Change the World(Chicago Dramatists); and The Casuals (Jackalope Theatre Company). He pursued his MFA in directing from Northwestern University. He has taught at University of Michigan, Northwestern University, University of Chicago, Columbia College and The School at Steppenwolf.

Simon Stephens (Playwright) is an English playwright whose plays have been widely produced in the UK, Europe, Australia and the US. Stephens is an Artistic Associate at the Lyric Hammersmith and has been an Associate Playwright of Steep Theatre since 2013, where the successful Jonathan Berry helmed production of Birdland played this spring. In addition to his Olivier and Tony Award for The Curious Incident of the Dog in the Night-Time, Stephens has received the 2001 Pearson Award for Best Play for Port; the 2005 Olivier Award for Best New Play for On the Shore of the Wide World; Theater Heute's Award for Motortown in 2007, Pornography in 2008 and Wastwater in 2011; and the 2009 Manchester Evening News Award for Best Production for Punk Rock.  His play Heisenberg premiered in New York in 2015, opened on Broadway in 2016, and is currently enjoying productions all over the globe.  Stephens visited Steep in 2012 and 2016, during which he performed public readings of his work Sea Wall and Song from Faraway, and Steep presented the first ever public reading of his play Blindsided, a new work commissioned by the Royal Exchange Theatre in Manchester, England.

Stephens' other works include Birdland, Bluebird, Herons, One Minute, Country Music, Harper Regan, I am the Wind, Three Kingdoms, Morning, a new version of Ibsen's A Doll's House, Carmen Disruption, The Funfair, a new version of Ödön von Horváth's Kasimir and Karoline, his version of Brecht and Weill's The Threepenny Opera, Nuclear War, Fatherland, his English language version of Obsession, and his new adaptation of Chekhov's The Seagull.

Visitor Information
Steppenwolf is located at 1650 N Halsted St near all forms of public transportation, bike racks and Divvy bike stands. The parking facility ($13 or $15, cash or card) is located just south of our theater at 1624 N Halsted. Valet parking service ($15 cash) is available directly in front of the main entrance starting at 5pm on weeknights, 1pm on weekends and at 12noon before Wednesday matinees. Limited street and lot parking are also available. For last minute questions and concerns, patrons can call the Steppenwolf Parking Hotline at 312-335-1774.

Steppenwolf Education’s unique approach combines play production with educational components to enhance arts education for young audiences, as well as their teachers and families, as well as a professional leadership program for early-career professionals. Every season Steppenwolf for Young Adults (SYA) creates two full-scale professional productions specifically for teens. Working closely with the Chicago Public and metropolitan area schools and other community partners, Steppenwolf Education annually ensures access to the theater for more than 15,000 participants from Chicago’s diverse communities. The initiative also includes post-show discussions with artists; classroom residencies led by Steppenwolf-trained teaching artists in almost 100 classrooms in public high schools; professional development workshops for educators; and the Young Adult Council, an innovative year-round after-school initiative that uniquely engages high school students in all areas of the theater’s operations, as well as other teen and community based programs.

Steppenwolf Theatre Company is the nation’s premier ensemble theater. Formed by a collective of actors in 1976, the ensemble represents a remarkable cross-section of actors, directors and playwrights. Thrilling and powerful productions from Balm in Gilead to August: Osage County—and accolades that include the National Medal of Arts and 12 Tony Awards—have made the theater legendary. Steppenwolf produces hundreds of performances and events annually in its three spaces: the 515-seat Downstairs Theatre, the 299-seat Upstairs Theatre and the 80-seat 1700 Theatre. Artistic programming includes a seven-play season; a two-play Steppenwolf for Young Adults season; Visiting Company engagements; and LookOut, a multi-genre performances series. Education initiatives include the nationally recognized work of Steppenwolf for Young Adults, which engages 15,000 participants annually from Chicago’s diverse communities; the esteemed School at Steppenwolf; and Professional Leadership Programs for arts administration training. While firmly grounded in the Chicago community, nearly 40 original Steppenwolf productions have enjoyed success both nationally and internationally, including Broadway, Off-Broadway, London, Sydney, Galway and Dublin. Anna D. Shapiro is the Artistic Director and David Schmitz is the Executive Director. Eric Lefkofsky is Chair of Steppenwolf’s Board of Trustees. For additional information, visit steppenwolf.org, facebook.com/steppenwolftheatre, twitter.com/steppenwolfthtr and instagram.com/steppenwolfthtr.

Email ThisBlogThis!Share to TwitterShare to FacebookShare to Pinterest
Labels: opening, Shows on our radar, Steppenwolf for young adults, Steppenwolf Theatre, teen friendly theatre, The Curious Incident of the Dog in the Night-Time, Theatre Chicago