Shows On Our Radar: WORLD PREMIERE OF THE LADY DEMANDS SATISFACTION VIA BABES WITH BLADES THEATRE COMPANY THROUGH AUGUST 25TH

Chi IL Live Shows On Our Radar:
Adult Night Out 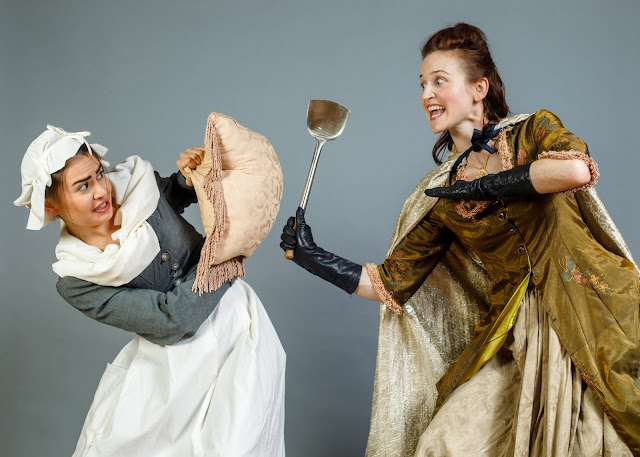 *This production uses realistic, bloodless staged violence and double-entendres of an adult nature in the telling of the story. Parental discretion is advised.*

It was my great pleasure to hear a full length staged reading of The Lady Demands Satisfaction at Babes With Blades' Fighting Words Festival last May. The script is witty and wonderful and I can't wait to catch the full production! Check back soon for my review. BWBTC has long been a favorite of ours here at ChiIL Mama and ChiIL Live Shows. If you're considering bringing the family, this production should be suitable for most tweens and up, but everyone's comfort level and maturity is different, so do your research. 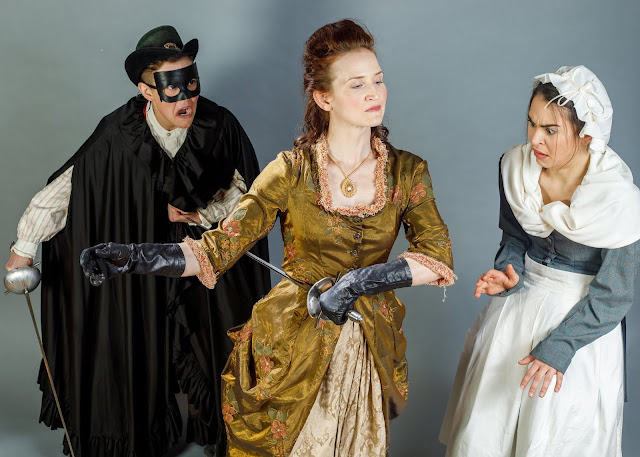 Regular performances are Thursdays – Saturdays at 8 p.m. and Sundays at 3 p.m. Preview tickets are $10, student and senior tickets are $15 and general admission are $25. Every show has limited tickets for Industry for $10, must present proof of theatre industry affiliation. Additional information and tickets are available now at BabesWithBlades.org.

In The Lady Demands Satisfaction, a young maiden, Trothe, learns that her entire inheritance will be forfeit to anyone that bests her in a duel. Trothe must turn to the finest blade anywhere, (luckily, her Aunt Theodosia) if she is to save her house and lands. In addition to her aunt, she is helped and hindered by two of her favorite servants - whose well-intentioned meddling could create an international incident when a famous German swordmeister arrives on the scene.  True to farcical tradition, identities and intentions are mistaken, comedy and sword fighting ensue, and all get the just end they deserve (even if it’s not the one the audience expects).

“Heading into our 21st season, we're so pleased to be bringing our third world premiere by Arthur Jolly to the stage,” said Co-Artistic Directors Kathrynne Wolf and Elyse Dawson. “This period farce, The Lady Demands Satisfaction, features 18th-century women after our own hearts: taking charge of their destiny while subverting societal ideas of what it means to be female. The show honors our roots with numerous fights in a variety of styles, including robust and silly swordplay, all perfectly in sync with our mission of placing women center stage.” 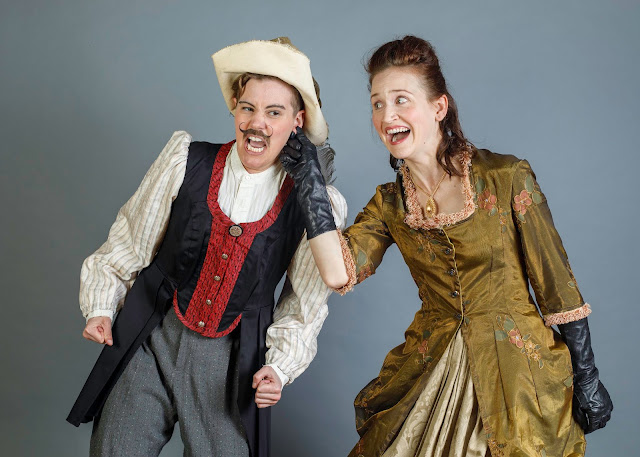 These blind submissions should be full-length plays that are then read by and voted on by the Ensemble. The winner will participate in the Fighting Words development process and eventually be staged as a full Babes With Blades production. The winning playwright will also receive $1000 as part of the Margaret Martin Award, sponsored by BWBTC’s longtime benefactor, David Woolley. Questions may be sent to newplays@babeswithblades.org and all script submissions to joiningswordandpen@babeswithblades.org.

Talk Back with the Playwright
Post Show, Sunday, July 29
Join the Company after the matinee performance to hear from the playwright of The Lady Demands Satisfaction, Arthur M. Jolly.

ABOUT ARTHUR M. JOLLY, PLAYWRIGHT
Arthur Jolly writes for stage and screen. He was recognized by the Academy of Motion Picture Arts & Sciences with a Nicholl Fellowship in Screenwriting, and in 2017 won the Hammond House International Literary Prize for a Screenplay. As a playwright, Jolly is a three-time Joining Sword and Pen (JS&P) winner, a finalist for the Woodward/Newman Drama Award and has penned more than 60 produced plays, with productions across the US and in Canada, Europe, Asia, Africa and South America. Previously at Babes With Blades Theater Company, A Gulag Mouse, (JS&P 2010 winner) and Trash (JS&P 2012 winner), both published by Next Stage Press. Where We Disappear, a feature film based on A Gulag Mouse, is in post-production. Other published works include Childish Things, The Christmas Princess, The Four Senses of Love, How Blue is My Crocodile, The Ithaca Ladies Read Medea, Long Joan Silver, Past Curfew, Rising, and two short play collections Thin Lines and Guilty Moments. Jolly is a member of the Writing Guild of America caucus, The Alliance of Los Angeles Playwrights, and The Dramatists Guild.

ABOUT MORGAN MANASA, DIRECTOR
Morgan Manasa, a transplant from Detroit, has been a theatre-maker in Chicago for the past 17 years. Manasa recently stepped down after serving as the managing director for Babes With Blades Theatre Company where she was most recently seen in their all-female production of Henry V (Fluellen) and Witch Slap (Goody Blunt).

ABOUT SAMANTHA KAUFMAN, VIOLENCE DESIGNER
Samantha Kaufman is an advanced actor/combatant with the Society of American Fight Directors and an intermediate actor/combatant with Fight Directors Canada. She has her MFA in acting from Florida Atlantic University and went through the professional circus-training program at the Actors Gymnasium in Chicago. She currently lives in Chicago but travels the country acting, fight directing and teaching.

BWBTC’s 2018-19 programming is partially made possible by the kind support of The Gaylord & Dorothy Donnelley Foundation, The Paul M. Angell Family Foundation, The Illinois Arts Council Agency, and a CityArts Grant from the City of Chicago Department of Cultural Affairs & Special Events
Posted by Bonnie Kenaz-Mara at 11:31 AM