FLASH GIVEAWAY: WIN a Pair of Tickets ($90 value!-2 pairs available) to The Last Defender at The House Theatre


THE HOUSE THEATRE OF CHICAGO PRESENTS THE WORLD PREMIERE OF THE LAST DEFENDER, WRITTEN AND DIRECTED BY NATHAN ALLEN, JANUARY 21 – MARCH 13 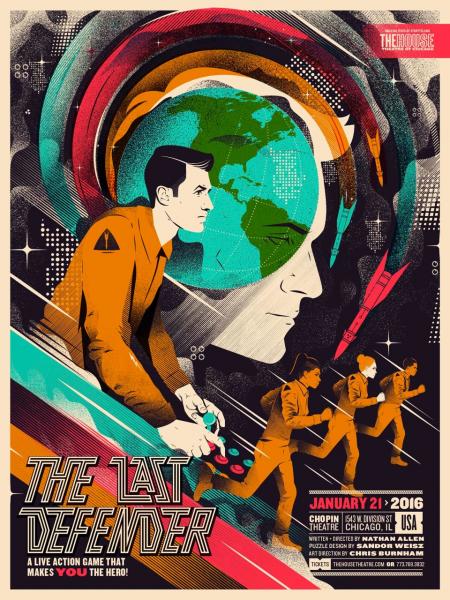 Here at ChiIL Mama & ChiIL Live Shows we are waaaay beyond stoked about The House Theatre of Chicago's latest, A Groundbreaking Experiment in Interactive Storytelling from Artistic Director Allen, Puzzle Designer Sandor Weisz and DC Comic Artist and House Company Member Chris Burnham. We had to miss opening weekend but it's high up there on our absolute MUST SEE (and DO) list and we're heading over to review as soon as possible.

In even better news, we are partnering up with The House Theatre yet again, for a great giveaway for a couple of our lucky readers.

Two of our lucky readers will each WIN a Pair of Tickets ($90 value!-2 pairs available) to The Last Defender at The House Theatre. Winners choice of any Thursday or Sunday show from February 4th through March 13th pending availability!

The regular performance schedule is as follows: Thursdays at 7 p.m., Fridays at 7 and 9 p.m., Saturdays at 2, 4, 7 and 9 p.m. and Sundays at 4:30 and 7 p.m. through March 13. Regular run tickets range from $40-45, and $10 Student and Industry same-day discounted tickets available, based on availability. For more information and to purchase tickets, please visit www.thehousetheatre.com or call 773.769.3832.

Set during the Cold War, The Last Defender draws on the era's sense of paranoia, and fear of nuclear attack to give audiences a one-of-a-kind storytelling experience. Audiences members become the heroes of the story in The Defenders' underground headquarters. The United States and The Soviet Union are still mired in the Cold War. Artificial intelligence has been deployed alongside 8 bit arcade-style computer technologies to control our nuclear weapons. Players (audience members) will navigate their own paranoia, as well as the stresses of Mutually Assured Destruction to do the job of The Defenders. Everyone will work as a team to gather information, solve puzzles, and make increasingly difficult decisions in real time. All to complete The Defenders' mission and save the world.

In addition to a fully immersive scenic and lighting design, film footage, and audience costumes, The Last Defender features an intricate technical system designed by Ben Wilhelm, a House company member and the show’s Software Architect. The audience-players will experience and interact with NASA-styled command stations that give real-time responses, determining the next chapters of the story, unique to each player group.

ABOUT NATHAN ALLEN, Writer and Director
Nathan founded The House Theatre of Chicago with friends in the year 2001 and continues to lead the company as Artistic Director. Writing and directing credits include Death and Harry Houdini, The Sparrow, Rose and the Rime, and The Hammer Trinity (The Iron Stag King, The Crownless King, and The Excelsior King.) He also wrote and starred in The Valentine Trilogy (San Valentino and The Melancholy Kid, Curse of the Crying Heart, and Valentine Victorious) and directed The Magnificents by Dennis Watkins, with whom he created the weekly magic show, The Magic Parlour. Nathan's work has been seen on the stages of The House, The Steppenwolf Merle Reskin Garage Theatre, The Arsht Center of Miami, The Stoneham Theatre in Boston, Strawdog Theatre, The Neo-Futurarium, Collaboraction, and The Kennedy Center in Washington D.C. Nathan has received acknowledgements from the Joseph Jefferson Awards, The Orgie Awards, and The American College Theatre Festival.  He has been named an Associate Artist at The Adrienne Arsht Center in Miami, and received the Emerging Leader Award from his alma mater, Southern Methodist University.

ABOUT SANDOR WEISZ, Puzzle Designer
Weisz is the commissioner of The Mystery League. He’s built puzzles for the likes of the Chicago Architecture Foundation, The University of Chicago, The House Theatre, The Art Institute of Chicago, Marbles Game Store, and Cards Against Humanity. He has been making puzzles and puzzle hunts since he was a teenager. You can often hear them on the NPR Sunday puzzle, or read them on his blog. His previous career was designing for the web. He lives in Chicago with his wife and two kids, with whom he records The ZED Show podcast. Find him on Twitter at @santheo and@pzlr.

ABOUT THE CREATIVE TEAM
The design team includes many Company Members of The House Theatre of Chicago, some returning to collaborate for the first time in several seasons. Lee Keenan designs the immersive, interactive Defender Headquarters in the downstairs Chopin Theatre space as the scenic and lighting designer. Melissa Torchia outfits the audience players in Defender uniforms as the costume designer. Lucas Merino (currently the Cinematics and Video Editor at California-based Blizzard Entertainment game company) creates the in-game films. Chris Burnham (artist for DC Comics’ Batman Incorporated, among many others) serves as Art Director. Ben Wilhelm returns in a brand new role as Software Architect. Brian DesGranges, who’s managed several of the company’s most acclaimed productions, is the Stage Manager. The in-game super computer, M.A.D.A.I.,(pronounced May-Day) will be voiced by company member Brenda Barrie. Guest artists include Sarah Espinoza (sound), and Eleanor Kahn (properties).

ABOUT THE HOUSE THEATRE OF CHICAGO
The House is Chicago's premier home for original works of physical and spectacle storytelling. Founded and led by Artistic Director Nathan Allen and driven by an interdisciplinary ensemble of Chicago’s next generation of great storytellers, The House aims to become a laboratory and platform for the evolution of the American theatre as an inclusive and popular artform.The House was founded in 2001 by a group of friends to explore connections between Community and Storytelling through a unique theatrical experience. Since becoming eligible in 2004, The House has been nominated for 60 Joseph Jefferson Awards (19 wins) and is a winner of a 2014 National Theatre Company Grant from the American Theatre Wing, founder of the Tony Awards. Now in its 14th year of original work, The House continues its mission to unite Chicago in the spirit of Community through amazing feats of Storytelling.

Disclosure: We're elated to partner up with The House Theatre of Chicago. They have provided us with The Last Defender review tickets and giveaway tickets for our readers. As always, all opinions are our own.