Due to overwhelming success, Chicago Theatre Week is expanding in 2015. The upcoming celebration of the rich tradition of theatre-going in Chicago is returning for its third year and will take place February 12 – 22, 2015, spanning a week and two full weekends for the first time. More than 100 productions are expected to participate as part of the 2015 lineup. Chicago Theatre Week is presented by the League of Chicago Theatres in partnership with Choose Chicago.

A few of Chicago Theatre Week’s 2015 participating productions include The Selfish Giant at Chicago Children’s Theatre; Waiting for Godot at Court Theatre; Rapture, Blister, Burn at the Goodman Theatre; Tannhäuser at the Lyric Opera of Chicago; Tommy at Paramount Theatre; Marie Antoinette at Steppenwolf Theatre Company; Mr. Burns: A Post Electric Play at Theater Wit; and Samsara at Victory Gardens Theater. The complete list of participating theatres are listed on www.chicagotheatreweek.com. In the past two years, more than 200 shows have offered value-priced tickets to more than 600 performances in one week. Visitors and residents will again have the opportunity to sample the extraordinary range of theatrical offerings throughout Chicagoland. 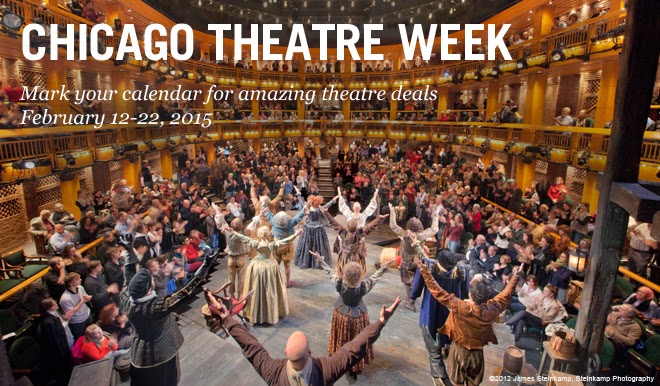 “The decision to expand Chicago Theatre Week comes in response to the overwhelming success this celebration has seen over the past two years,” comments Deb Clapp, Executive Director of the League of Chicago Theatres. “We are so thrilled to be able to share the amazing work this theatre community produces with audiences during this 10-day celebration.”

“Choose Chicago is excited to be a partner for Chicago Theatre Week in 2015,” declares Melissa Cherry, Vice President of Cultural Tourism & Neighborhoods of Choose Chicago. “This is a perfect moment for visitors to experience the city, and shine a light on Chicago's amazing theatre scene.”

Kate Lipuma, Executive Director of Writers Theatre and Chair of the League of Chicago Theatres adds, “The reach of Chicago Theatre Week has expanded so much that one week just wasn’t enough! The 10-day celebration in 2015 will offer Chicagoans and visitors even more opportunities to visit their favorite theatres and explore new companies all across Chicago.”

For a comprehensive list of Chicago productions, visit the League of Chicago Theatres website, www.chicagoplays.com.  Half-price tickets are available each week at www.hottix.org.  Additional information about Chicago Theatre Week is available at www.chicagotheatreweek.com.
Posted by Bonnie Kenaz-Mara at 6:11 PM