THE SEUSSICAL MUSICAL'S WUBULOUS FUN. I'VE SEEN IT TWICE WITH MY
DAUGHTER AND SON.

NOW CST Courtyard's the site of the show, showing colorful creatures and places you'll go! For Seuss has amused and influenced us all, and this musical rocks for the large and the small. ChiIL Mama is silly with SEUSSICAL musings and 2 times a FREE family 4-pack for choosing!!

Disclosure:  Thanks to our friends at Chicago Shakespeare Theatre for providing the tickets for our giveaway and providing review tickets to my family. Thanks for enriching our lives with such stellar productions.  As always, all opinions are our own.

ENTER HERE for your chance to WIN 4 tickets (up to $112 value) to any Seussical performance through the end of July. Two winners chosen!
Enter through midnight 7/15. Good for any show through July 31st that is not sold out. **Please Note: This 75-minute production of Seussical is best enjoyed by ages 5 and up.

We truly have seen different productions of this musical two times over the years, but we're super stoked to check out Chicago Shakespeare Theatre's take on this colorful classic and we'll be there this weekend to review on the 12th. All of us grew up with Dr. Seuss and have read his fabulously funny and insightful books to our own children. He's still a top favorite of mine! And Chicago Shakespeare Theatre is a top favorite of ours, too, for consistently creative, professional offerings.

Back in the day, I read somewhere that Dr. Seuss's high school art teacher told him his drawing skills sucked and he should just give it up. Fortunately he didn't listen, but when he started shopping around his stories his first book was rejected by 27 publishers. He was ready to burn the manuscript when someone took a chance on it. Once he finally caught a break, he went on to sell over 600 MILLION books, publish 44 kids' books, and become a beloved author who changed the language of the world! I find that hugely inspiring when I feel like giving up on something. 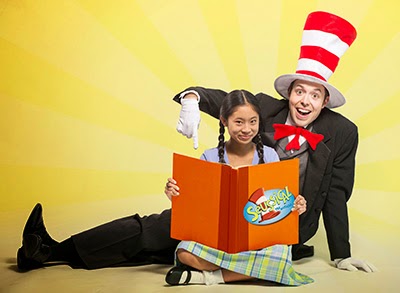 SEUSSICAL Photo Credit: Michael Brosilow
Alex Goodrich as The Cat in the Hat and Emily Chang as Jojo

Chicago Shakespeare Theater continues its annual partnership with the Chicago Children's Museum, presenting the following series of programs featuring Seussical:
CST strives to make its facility and performances accessible to all patrons. Access programs for Seussical include: 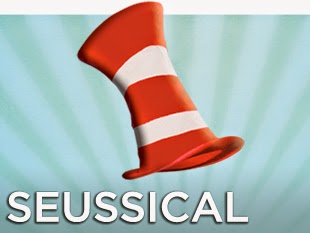 Alex Goodrich performs the role of The Cat in the Hat, the mischievous and playful narrator. In addition to previously being seen at CST in The Taming of the Shrew, the Jeff Award-winning actor has honed his comedic and musical skills around Chicago at a number of theater companies including the Marriott Theatre in Lincolnshire and Royal George Theater. As the thoughtful and observant Horton the Elephant, George Andrew Wolff returns to CST after appearing in previous summer family musicals includingThe Emperor's New Clothes and Willy Wonka. Lillian Castillo makes her CST debut as loveable one-feathered Gertrude McFuzz. Additional casting includes: Emily Chang, Lisa Estridge, Cory Goodrich, Aaron Holland, Ericka Mac, Liam Quealy, Joseph Sammour, Allison Sill and Krystal Worrell.

Director Scott Weinstein notably contributed to the early development of the musical comedy Murder for Two, and joined the creative team for its World Premiere at Chicago Shakespeare in 2011. Murder for Two has since gone on to a wildly successful Off-Broadway run, garnering Drama Desk and Drama League Award nominations among others. Weinstein is the associate director for the Chicago, Las Vegas and National Tour productions of the long-running hit Million Dollar Quartet. In addition to working with CST Artistic Director Barbara Gaines on David Ives' The School for Lies, Weinstein directed Fairy Tales, a theatrical concert CST presented in collaboration with The Chicago Chamber Musicians. Jeff Award-winning Music Director Michael Mahler comes to Seussical following a turn as the musical director for CST's production of the Sondheim and Weidman musical Road Show, directed by Associate Artistic Director Gary Griffin. Mahler was recently tapped by producer Cameron Mackintosh to pen additional updated lyrics for the highly anticipated West End revival of Miss Saigon. Mahler's additional CST credits include the music direction for last summer's Shrek The Musical and the original book and score for the family musical How Can You Run with a Shell on Your Back?, which was written with Alan Schmuckler and premiered at CST in 2007.

Joining the artistic team is Tommy Rapley as the production's Choreographer. Scott Davis is Scenic Designer, returning to Chicago Shakespeare after designing Road Show, Shrek The Musical and Othello: The Remix. Costume Designer Theresa Ham returns to CST after creating the imaginative costumes for Shrek The Musical and Beauty and the Beast. Jeff Award-winner Jesse Klug, whose previous work at CST includes Cyrano de Bergerac and Othello: The Remix, serves as Lighting Designer. CST Sound Master James Savage is Seussical's Sound Designer; among his nearly forty productions at CST, recent designs include Othello: The Remix and Murder for Two. CST's resident Jeff Award-winning Wig and Make-up Designer Melissa Veal, who has designed over seventy-five productions at Chicago Shakespeare, completes the creative team.
Chicago Shakespeare Theater's CST Family Series presents a wide range of affordable programming especially for families. Offerings year-round include Short Shakespeare! abridgments of Shakespeare plays, classical music concerts with Chicago Chamber Musicians and Chicago Shakespeare in the Parks, which produces free Shakespeare performances in neighborhood parks throughout the city. These programs reach more than 45,000 patrons each season—making Chicago Shakespeare one of the largest providers of family programming in Chicago.

Disclosure:  Once again, thanks to our friends at Chicago Shakespeare Theatre for providing the tickets for our giveaway and providing review tickets to my family. Thanks for enriching our lives with such stellar productions.  As always, all opinions are our own.