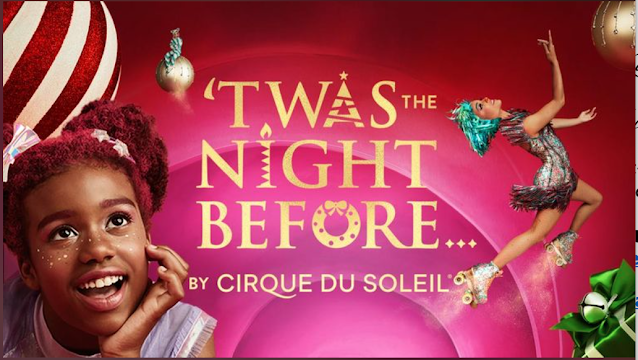 “‘TWAS THE NIGHT BEFORE…”

Tickets for performances at The Chicago Theatre, November 26 - December 5, are now on sale!

Here at ChiIL Mama we're way beyond excited that Cirque du Soleil will be back in Chicago imminently! It's been way too long and we are so overdue for some circus inspired holiday joy. Of course tis also the season for gifting, and the family that plays together makes memories instead of clutter. So think about tickets and plan some multigenerational fun.

Madison Square Garden Entertainment Corp. (MSG Entertainment) and Cirque du Soleil are pleased to announce that the acclaimed family holiday theatrical – “‘Twas the Night Before…” by Cirque du Soleil – is returning to The Chicago Theatre (175 N. State Street) for 17 performances only from November 26 through December 5, 2021, prior to opening in New York at the Hulu Theater at Madison Square Garden December 9.

“‘Twas the Night Before…,” Cirque du Soleil’s exhilarating spin on the beloved Christmas tale, is about the wonders of sharing and friendship. The production marks Cirque du Soleil’s first-ever Christmas show and is a flurry of Christmas cheer – rip-roaring fun with hugely lovable characters that will introduce audiences to the magic of Cirque du Soleil and help families create new holiday traditions.

The critically acclaimed production of “‘Twas the Night Before…,” returns to The Chicago Theatre and Hulu Theater at Madison Square Garden after debuting at both venues in 2019. The Chicago run sold more than 50,000 tickets, completely selling out its 17-show engagement, while the New York run sold out a whopping 25 performances.  Among the national buzz this holiday theatrical garnered:

“’Twas the Night Before… delivers terrific holiday entertainment that should delight children and adults alike.” – THE HOLLYWOOD REPORTER

“The acrobats are all glamour and athleticism, the skaters all speed and daring.” – THE NEW YORK TIMES

Tickets for “‘Twas the Night Before…” at The Chicago Theatre start at $30 and can be purchased online at www.chicagotheatre.com/cirque or at the Ticketmaster Box Office at The Chicago Theatre. Box office hours are Monday-Friday, 12:00 p.m. to 6:00 p.m. Service charges apply to internet orders. For group sales, please call 212-465-6080. Accessible and companion seats are available via the Disabled Services Department at 888-609-7599.

The Chicago Theatre continues to operate in accordance with all government mandates, and current City of Chicago and State of Illinois guidelines require that all guests age 2 and older, regardless of vaccination status, wear masks in The Chicago Theatre, except while actively eating or drinking. Government mandates, venue protocols and event requirements are subject to change, so be sure to continue to check www.chicagotheatre.com/cirque for the latest information.

Connect with us on social!

‘Twas the Night Before… is the 49th original production of Cirque du Soleil. Originally composed of 20 street performers in 1984, Cirque du Soleil completely reinvented circus arts and went on to become a world leader in live entertainment. Established in Montreal, the Canadian organization has brought wonder and delight to more than 200 million spectators in more than 450 cities in over 60 countries on six continents. Cirque du Soleil is owned and operated by Cirque du Soleil Entertainment Group. For more information, visit cirquedusoleil.com