ChiIL Streaming Shows On Our Radar

Lifeline Theatre Kicks Off its 39th Season with 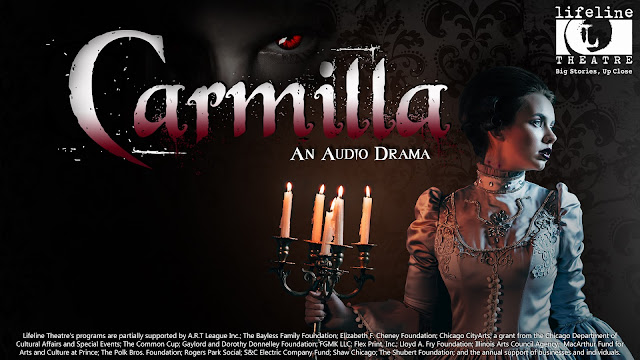 Carmilla, an audio drama, will run Saturday, Oct. 30 – Tuesday, Nov. 30 online. Beginning October 30, the  episodes will air week by week until the final episode at which point all will be available for listening until  November 30. Ticket holders will receive a password to a private webpage where the episodes will be  available for listening. The ticket price is Name Your Price (suggested donation of $20) for full access until  November 30. Tickets go on sale Friday, September 17 and can be purchased by visiting www.lifelinetheatre.com or by calling our box office at 773.761.4477.

The complete cast and production team for Carmilla includes:

Aly Renee Amidei has been a member of Lifeline’s artistic ensemble since 2012 and originally adapted  Carmilla for Wildclaw Theatre in 2011. Most recently for the Lifeline stage, she adapted and costume  designed Bunny’s Book Club for the KidSeries. Other Lifeline credits include: adapting and designing Lester’s  Dreadful Sweaters and doing costumes for Fabel-ous! She is also a proud ensemble member at Strawdog  Theatre Company and Buffalo Theatre Ensemble. Her costume and makeup designs have been seen at  Michigan Shakespeare Festival, Lakeside Shakespeare Theatre, Irish Theater of Chicago, Magick Theatre in  San Antonio, Buffalo Theater Ensemble, Stage Left, Artistic Home, House Theater, Piven Workshop, and  Vitalist Theater. She is the assistant professor of costume design at the University of North Carolina-Charlotte  and her research focuses on designing for new works and re-envisioned classics.

Scott Cummins has been involved in over 90 productions throughout the United States either as an actor,  director and/or fight choreographer. He is an Artistic Associate for both WildClaw Theatre Company and  Lakeside Shakespeare Theatre, and a company member of Vs. Theatre Company. He directed the World  Premiere of Carmilla for WildClaw Theatre Company in 2011. Other Chicago productions include: the Midwest  premiere of Scenes From The Big Picture for Seanachai Theatre and I’m Spritual Dammitby Jennifer Weigel  for Route 66 Theatre. Most recently, he directed Pool Boy by Wendy Hopkins for Lost Angels Theatre in Los  Angeles, as well as True West at Vs. Theatre Company.

Beginning Saturday, Oct. 30, the episodes will air week by week until the final episode at which point all will  be available for listening until November 30. Ticket holders will receive a password to a private webpage  where the episodes will be available for listening. The ticket price is Name Your Price (suggested donation of  $20) for full access until November 30. Tickets go on sale Friday, September 17 and can be purchased by visiting www.lifelinetheatre.com or by calling our box office at 773.761.4477.

Now in its 39th season, Lifeline Theatre continues to explore, interpret, and reimagine books and other literary  works to create stories that move us beyond the margins of our own lives. Lifeline Theatre – Big Stories, Up Close.

Posted by Bonnie Kenaz-Mara at 9:31 PM