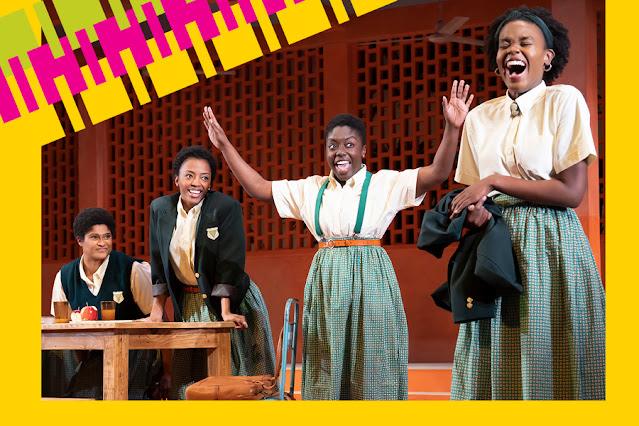 Last March my daughter and I held press tickets for the opening of School Girls; Or, The African Mean Girls Play at The Goodman. Little did we know then that it would be nearly a year and a half before we had that chance again. Since then our family has experienced remote high school and college learning, a drive-through parking lot graduation, a lack of homecoming/prom/senior plays, a covid hospitalization, unemployment in the arts, and both a birth and a death in the family.
It's been quite a year... and then some for us and for the world as a whole. Kudos to Goodman Theatre for offering free tickets for this production to both healthcare workers and performing arts professionals!
In acknowledgement of healthcare workers, whose efforts have cared for Chicagoans during the pandemic, as well as performing arts professionals, who may have lost work while stages were dark during this difficult time for the industry, the Goodman is pleased to offer 1,500 free tickets to School Girls; Or, The African Mean Girls Play. Healthcare and performing arts industry professionals can reserve free tickets by visiting GoodmanTheatre.org/ThankYou.
We're elated to be able to hug our loved ones, gather with friends, and get artists back to work. My inbox is finally brimming with reopenings instead of cancellations and closures. Reviews are ramping up and I for one can't wait to feel the interconnectedness, depth, and energy that only live shows provide. See you out there! 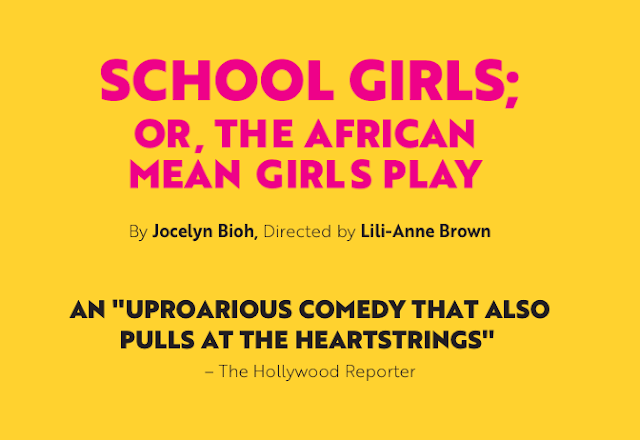 School is back in session! Goodman Theatre returns to the stage with the Chicago-premiere production of the Off-Broadway smash sensation, School Girls; Or, The African Mean Girls Play. Full casting is below. Written by Jocelyn Bioh and directed by Chicago favorite Lili-Anne Brown, this “uproarious comedy that also pulls at the heartstrings” (The Hollywood Reporter) is back after being halted several days shy of its opening night last year (March 2020). The production was then offered in a limited online streaming engagement, viewed by households in 45 U.S. states and 13 countries around the globe—as well as offered free-of-charge to 1,600+ Chicago public school students. School Girls; Or, The African Mean Girls Play appears July 30-August 29 (opening night is Monday, August 2) in the Goodman’s Albert Theatre. Capacity is limited and masks will be required. Tickets (starting at $15) are on sale now at GoodmanTheatre.org/SchoolGirls and by phone at 312.443.3800.

"When I first read this play, I just died laughing. I could not believe how funny it was and where it went and how it ended," said Director Lili-Anne Brown. "We are so grateful and excited to get to revisit this story and finally share it with live audiences—and in the summer, where it truly belongs!"

Biting and buoyant, School Girls; Or, The African Mean Girls Play earned critical and popular acclaim in its Off-Broadway extended run. As the reigning queen bee at Ghana’s most exclusive boarding school sets her sights on the Miss Universe pageant, a new student unexpectedly changes the game, forcing her to defend her reputation—and status. This “nasty-teen comedy, wonderfully refreshed and deepened” (The New York Times) spotlights the universal similarities—and glaring differences—of teenage girls around the globe.

“School Girls; Or, The African Mean Girls Play enjoyed five successful previews before we had to suspend performances last March. We didn’t know then that it would be 506 days before the play would take the stage again, but we always knew that this play—in which comedy is infused with serious, relevant themes—would be the first we would produce upon our return,” said Goodman Theatre Artistic Director Robert Falls. “We warmly welcome back Lili-Anne and her wonderful company, and look forward to sharing Jocelyn’s wise, ebullient play with Chicago audiences anew.”

ABOUT THE PLAYWRIGHT AND DIRECTOR

Lili-Anne Brown (Director) is a native Chicagoan who works as a director, actor and educator. She has performed in, directed and produced many award-winning shows, both local and regional. Goodman credits include I Hate It Here and the world premiere of Ike Holter's Lottery Day. She is the former Artistic Director of Bailiwick Chicago, where she focused programming on Chicago-premiere musicals and new play development with resident playwrights. She is a member of SDC, AEA, SAG-AFTRA and is represented by William Morris Endeavor. lilbrownchicago.com

ACCESSIBILITY AT THE GOODMAN

Audio-Described Performance, August 21 at 2pm – The action/text is audibly enhanced for patrons via headset

Open-Captioned Performance, August 28 at 2pm – An LED sign presents dialogue in sync with the performance

Chicago’s theater since 1925, Goodman Theatre is a not-for-profit arts and community organization in the heart of the Loop, distinguished by the excellence and scope of its artistic programming and community engagement.

Led by Artistic Director Robert Falls and Executive Director Roche Schulfer, the theater’s artistic priorities include new play development (more than 150 world or American premieres), large scale musical theater works and reimagined classics. Artists and productions have earned two Pulitzer Prizes, 22 Tony Awards and more than 160 Jeff Awards, among other accolades. The Goodman is the first theater in the world to produce all 10 plays in August Wilson’s “American Century Cycle.” It’s longtime annual holiday tradition A Christmas Carol, now in its fourth decade, has created a new generation of theatergoers in Chicago. The Goodman also frequently serves as a production and program partner with national and international companies and Chicago’s Off-Loop theaters.

Using the tools of the theatrical profession, the Goodman’s Education and Engagement programs aim to develop generations of citizens who understand the cultures and stories of diverse voices. The Goodman’s Alice Rapoport Center for Education and Engagement is the home to these programs, which are offered free of charge for Chicago youth—85% of whom come from underserved communities—schools and life-long learners.