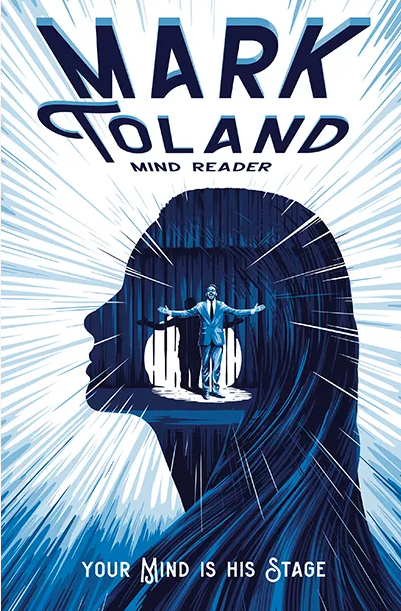 Over the course of 75 minutes, Toland engages audience members with psychological illusions and mysteries of the mind. “Get ready for an unforgettable evening,” said Toland. “The audience is the cast, their thoughts are my props and their minds will be blown!” Audiences should prepare to take part in the show, as Toland attempts to get into their thoughts and reveal what they are thinking. “There are no weekly mentalism shows in the city right now, so I’m thrilled to bring an exciting new show to Chicago audiences every week.”

Mark Toland knows what you’re thinking. He can tell you your birthday, where you grew up, and what you did last summer. He will, quite literally, blow your mind. The audience is the cast, your thoughts are his props, and your mind is his stage.

Mark Toland has appeared on NBC, WGN, FOX, ABC, NPR, and even given his own TED Talk. Plus, he is the go-to entertainment choice for major corporations, including Disney, Pepsi, McDonald’s, Honda, 1-800- Contacts, and more.

Now it’s your chance to witness Mark’s unbelievable mind reading skills up close. Does he know what you’re thinking? Can he read your mind? Find out every Wednesday at 8pm.

Posted by Bonnie Kenaz-Mara at 9:31 AM