THAT'S ONE SMALL STEP FOR MAN,
ONE GIANT LEAP FOR THEATER

**Moon Shot: A Race to Space runs approximately one hour and is ideal for ages 10 to adult. **

Theater Unspeakable's a local favorite of ours here at ChiIL Mama and ChiIL Live Shows. We adore their concept of performing contact theatre in a confined space-- a raised 21 square foot table! This leads to Twister-like scenarios and precarious blocking and adds a challenging intimacy to their shows that's fascinating to watch. We're also huge fans of Chicago Children's Theatre's Later Stages series for ages 10+. Chicago's theatre scene is incomparable on the adult productions front and has quite a few stellar companies doing children's theatre for the very young. Until now, the tweens and younger teens have been largely overlooked. Kudos to Chicago Children's Theatre for realizing many savvy urban children age out of early childhood theatre before childhood ends. There are plenty of theatre loving kids from age 10 on, that aren't quite ready for full on adult fare. This is the show for you!

Using only their bodies and their voices, this astounding troupe of Chicago actors brings to life one of the most daring times in the history of human exploration: the Space Race. From the Cold War to Sputnik, from Yuri Gagarin to Neil Armstrong, this action-packed show brings Theater Unspeakable's tongue-in-cheek humor to a whole new atmosphere - one where the rules of gravity no longer apply.

Chicago Children's Theatre's performance home, the Ruth Page Center for the Arts, is convenient to public transportation, surrounded by family-friendly restaurants and located just steps from the Magnificent Mile. 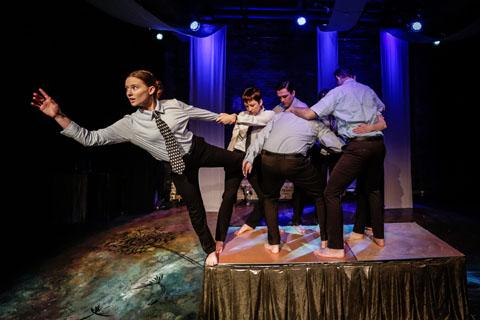 Sensory friendly performance with quiet room for children on the autism spectrum or with Down Syndrome:
Sunday, November 13 at 2:30 p.m.

It's the morning of July 16, 1969, a little over eight years since the flights of Yuri Gagarin and Alan Shepard, which spurred President Kennedy to challenge NASA to put a man on the moon before the decade was out. Apollo 11 astronauts Neil Armstrong, Buzz Aldrin and Michael Collins sat atop Saturn V at Launch Complex 39A at the Kennedy Space Center, ready for the first manned flight to the moon.

At 9:32 a.m. EDT, the engines fired and Apollo 11 cleared the tower. About 12 minutes later, the crew was in Earth's orbit. After one and a half orbits, Apollo 11 got the "go" for what mission controllers called "Translunar Injection" - in other words, it was time to head for the moon.

Three days later the crew was in orbit. A day later, Armstrong and Aldrin climbed into the lunar module Eagle and began the descent, while Collins orbited in the command module Columbia.

When it came time to set Eagle down in the Sea of Tranquility, Armstrong improvised, manually piloting the ship past an area littered with boulders. When the lunar module landed at 4:18 p.m EDT, only 30 seconds of fuel remained. Armstrong radioed "Houston, Tranquility Base here. The Eagle has landed."

At 10:56 p.m. EDT Armstrong planted the first human foot on another world. With more than half a billion people watching on television, he climbed down the ladder and proclaimed: "That's one small step for a man, one giant leap for mankind." Aldrin joined him, and they explored the surface for two and a half hours, collecting samples and taking photographs. They left behind an American flag, a patch honoring the fallen Apollo 1 crew, and a plaque on one of Eagle's legs. It reads, "Here men from the planet Earth first set foot upon the moon. July 1969 A.D. We came in peace for all mankind."

Armstrong and Aldrin blasted off and docked with Collins in Columbia. The crew splashed down off Hawaii on July 24. President Kennedy's challenge had been met. (Source: https://www.nasa.gov.) 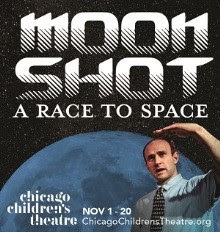 To date, Theater Unspeakable has created three original touring pieces. Their first "platform-style" piece, Superman 2050, was brought to life when Frost was awarded a six-month residency at Links Hall called the Lisa Dershin LinkUp. Chicago Children's Theatre subsequently presented SuperMan 2050 to unanimous audience acclaim in 2014. Other original works include Murder on the Midwest Express and The American Revolution.


What's Next? A Look Ahead to Chicago Children's Theatre's 2016-17 season
In addition to  Moon Shot: A Race to Space, Chicago Children's Theatre kicks off its 2016-17 season  with Thodos Dance Chicago's critically-acclaimed story ballet A Light in the Dark: The Story of Helen Keller and Anne Sullivan, co-choreographed by Thodos Dance Chicago Artistic Director Melissa Thodos and Broadway icon Ann Reinking, October 15-23, 2016.

Theatre Unspeakable's Moon Shot: A Race to Space is rotating performances at the Ruth Page with Another Snowy Day with Beatrix Potter & Friends, November 5-20, 2016. Will Bishop's delightful trunk show for the toddler set features mechanical suitcase sculptures with pulls and levers that little kids turn and crank to help tell every family's favorite Beatrix Potter stories.

With the New Year comes the return of CCT's smash hit musical The Hundred Dresses, adapted and created by Ralph "Ralph's World" Covert and G. Riley Mills, directed by Sean Graney, artistic director of The Hypocrites. Don't miss this engaging and enlightening musical about a young girl who struggles to stand up to others-even when she's standing alone, January 17-February 12, 2017.

Has your child asked to take a gap year? Let them find out what it's really like with CCT's world premiere of The Year I Didn't Go to School: A Homemade Circus. Created and directed by Lookingglass Artistic Director Heidi Stillman and based on the popular Giselle Potter picture book, this all-new production will be a thrilling experience for all ages, filled with circus arts, February 28-March 26, 2017.

All shows will be presented at the Ruth Page Center for the Arts, 1016 N. Dearborn St., Chicago. For memberships, subscriptions or passes, visit chicagochildrenstheatre.org or call (872) 222-9555.


New home for Chicago Children's Theatre to open in January 2017
In addition to presenting its 2016-17 mainstage season at the Ruth Page, Chicago Children's Theatre is busy transforming the former, 12th District Police Station at 100 S. Racine Avenue in Chicago's West Loop into a beautiful, mixed-use performing arts and education facility designed to serve all Chicago families.

Slated to open in January, 2017, Phase One of the new Chicago Children's Theatre will be CCT's headquarters for all educational programming, housing five classrooms for year round courses and camps for ages 0 to 14, and a space dedicated to year round Red Kite programs for children on the autism spectrum.
Phase One also boasts a flexible, 149-seat studio theater ready to host professional performances and student shows.

Phase Two of Chicago Children's Theatre's new building is anchored by a second, 299-seat mainstage theater, scheduled for completion in 2020.