A CELEBRATION OF 15 YEARS OF
BROADWAY IN CHICAGO,
FEATURES BROADWAY SHOW PERFORMANCES AT JAY PRITZKER PAVILION
AT MILLENNIUM PARK
MONDAY, AUGUST 17 AT 6:15 PM 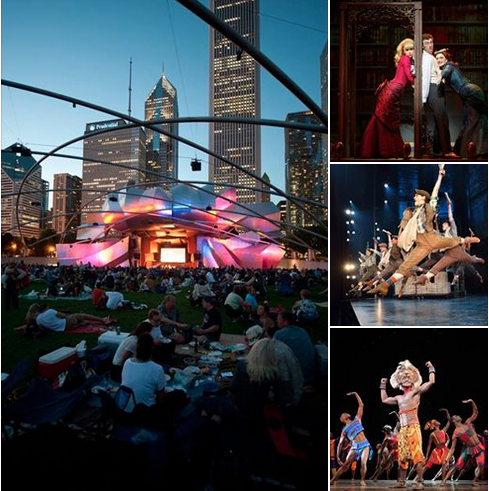 Come on out tonight to the Jay Pritzker Pavilion at Millennium Park (201 E Randolph St) and enjoy a free medley of Broadway In Chicago hits! Cast members from the Pre-Broadway World Premiere of GOTTA DANCE, the sparkling new tour of 42nd STREET, A GENTLEMAN’S GUIDE TO LOVE & MURDER, IF/THEN, Emerald City Theatre’s A CHARLIE BROWN CHRISTMAS, BEAUTIFUL – THE CAROLE KING MUSICAL, Roundabout Theatre Company’s CABARET, DIRTY DANCING – THE CLASSIC STORY ON STAGE, Disney’s NEWSIES and Disney’s THE LION KING will all be there.

Hosted by ABC 7 Chicago’s Janet Davies, from the entertainment and lifestyle program 190 NORTH, the concert will feature cast members from ten fantastic Broadway shows. The Broadway In Chicago Summer Concert at Millennium Park is produced in partnership with the City of Chicago Department of Cultural Affairs and Special Events.

Presented in collaboration with the Department of Cultural Affairs and Special Events as part of Millennium Park Presents. Millennium Park proudly presents symphonic music, dance, opera, Broadway hits and more—performed by some of Chicago’s best-loved cultural institutions.  For full calendar information, visit millenniumpark.org.  For exciting facts about the Park, program updates and weather cancellations, follow us on Twitter and Instagram @Millennium_Park and like us on Facebook.

“This summer concert is one of our favorite events of the year.  It's an unforgettable gathering of the friends and fans of Broadway In Chicago with an amazing array of performers representing the best of Broadway,” said Eileen LaCario, Vice President of Broadway In Chicago. “There is no better way to commemorate our 15th year than by celebrating in one of Chicago’s most iconic settings.”

For more information on the Summer Concert or any Broadway In Chicago show visit www.BroadwayInChicago.com.

ABOUT BROADWAY IN CHICAGO
Broadway In Chicago was created in July 2000 and over the past 15 years has grown to be one of the largest commercial  touring homes in the country.  A Nederlander Presentation, Broadway In Chicago lights up the Chicago Theater District entertaining well up to 1.7 million people annually in five theatres.  Broadway In Chicago presents a full range of entertainment, including musicals and plays, on the stages of five of the finest theatres in Chicago’s Loop including the Bank of America Theatre, Oriental Theatre, Cadillac Palace Theatre, the Auditorium Theatre of Roosevelt University and just off the Magnificent Mile, the Broadway Playhouse at Water Tower Place. 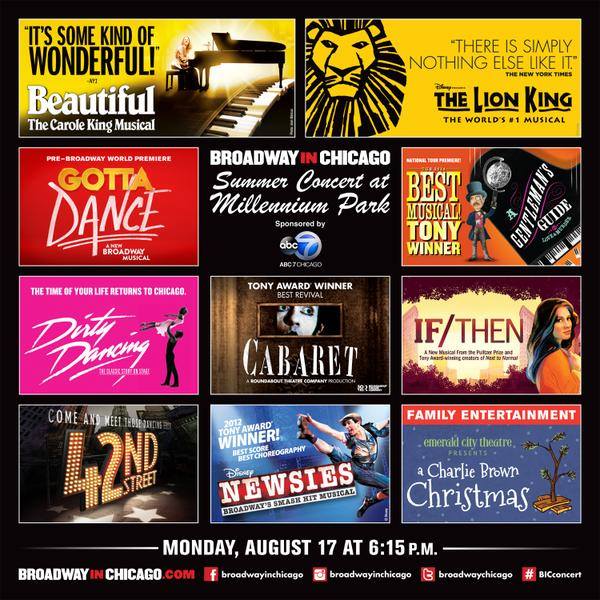